Arc’Teryx Ascent Product Line: An Impenetrable Fortress against the Elements – Part I

Editor’s Note: This was going to be one, all-encompassing post of the entire line, but after I got done writing just about the Alpha SV and Atom SV, I was already over 900 words. So, I will be spreading this out over as many posts as needed so as not to give you an Arc’Teryx imposed lobotomy. You’re welcome.

As with all the products I’ve received from Arc’Teryx, I am exceptionally grateful to have been able to try out all the majorly important elements of their “Ascent” product line. Unfortunately, I didn’t receive them until later in the winter season so I haven’t yet been able to test them in truly extreme environments. But there’s some good news to that: I’ll get to test them out this summer and next winter, when I have a better grasp on some of the more “extreme” hobbies Colorado has to offer. I’ll update this post and add others as needed. 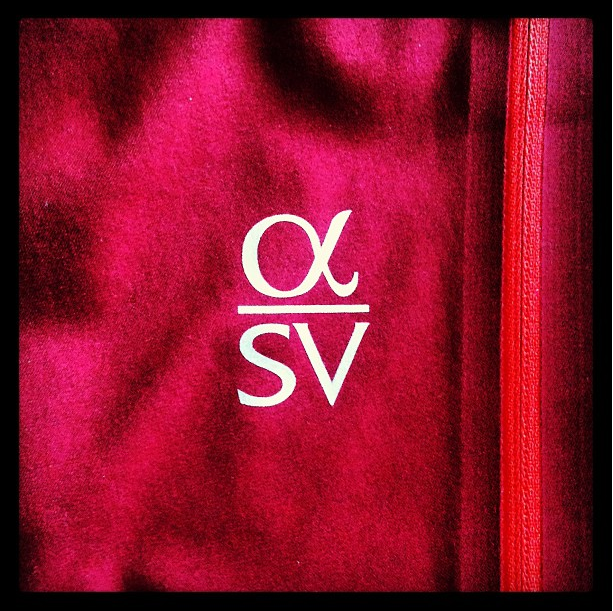 I’m putting these two together to save some space as I’ve already written of my love of the Atom SV, and I admittedly didn’t take the Alpha SV through anything resembling “extreme” so I’ve not much to say…yet.

Four years later, the Atom SV still has more insulating power (per weight) than any other jacket I’ve owned. The zipper is starting to fail (coming unzipped on its own), and it is losing some of its loft, but hey, it’s been my primary insulating layer and standalone jacket for four years. 4!! So with the addition of the Alpha SV, it’s a bombproof combination. Please review the previous post for detailed Pros and Cons of the Atom SV. 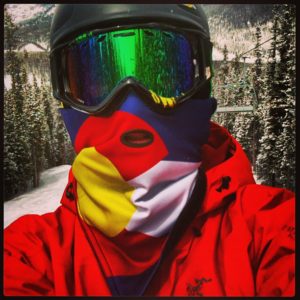 I really wish I had more time and horrendous conditions to write about, but instead, I have to tell you about the time I wore it on a bluebird day at Copper Mountain. Why? Breathability.

It was a balmy 28 degrees (maybe less) the day I was riding at Copper, but it was awesomely sunny. I was wearing the three top layers I mentioned above which should have made me sweat my brains out. Instead, I was comfortable. There was a time during the day, albeit brief, when it was cloudy, windy, colder, and threatening to snow. I was just as content with those conditions as when it turned sunny and warmed up. I’m a novice at tree runs and went down my first moguls (horribly). The added mental stress of blasting a tree or face planting a mogul, on top of the additional physical strain those runs require, definitely raised my body temp. This leads me to believe the updated Gore-Tex Alpha SV shell is doing a superb job of venting unwanted body heat. And that’s why I wanted to mention it now, with little time for thorough testing. 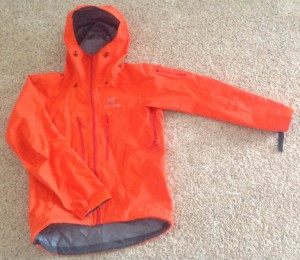 As for the fit, the Arc’Teryx website is spot on. It’s cut perfectly to include extra room for base layers without having to guess which size you need or being too loose and floppy if you don’t have base layers. I have a medium Stryka Hoody, a medium Atom SV, and a medium Alpha SV. The only bunching and scrunching I encountered was around my neck. And that’s because I was wearing THREE different types of hoods, a facemask that Velcros behind the neck, and a helmet.

There is no powder skirt (you’d need one of Arc’Teryx’s ski specific jackets for that), but the waist goes past my butt while the front drops just below my waist. The adjustable cinch chords, along with the proper length, keep the powder from getting underneath jacket just as well, provided you don’t experience a truly epic digger. And that includes numerous moderate falls practicing jumps, drops, ollies, and running into trees.

I’m used to jackets having limited Velcro lengths around the cuffs, but the Alpha SV has enough Velcro to completely close the opening or still be connected at full expansion. That’s a huge plus for my tiny, little wrists. To aid in this miracle, they’ve also included a section of elastic. A nice touch. 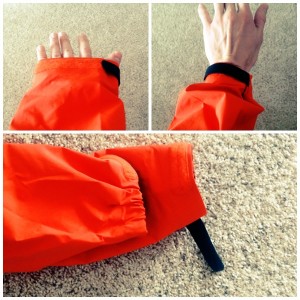 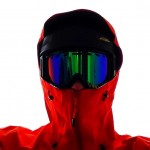 I didn’t wear my hood over my helmet the entire day at copper, but I did the following week at Loveland Ski Area. It was great.  It fit perfectly over the helmet and didn’t restrict movement whatsoever. I barely had to use the hood adjustment to keep it out of my peripherals as well.

The pocket system is a bit different from anything I’ve ever encountered. There are two outer chest pockets, one outer arm pocket, and two inner chest pockets. All include zippers. They are not really big enough to carry items much bigger than a cell phone, compass, wallet, etc. etc., but when wearing this for its intended use, high alpine excursions, I’m not sure you’d have too many items you’d need to get at it with high frequency.

Pit zips. It has them.

All in all, I’m supremely happy to have this jacket and can’t wait to really put it to the test. I have no doubt it will stand up to anything I, and Mother Nature, throw at it. But mostly, I’m sad that I have to wait an entire season to get this thing into some backcountry powder.