Editor’s Note: This was going to be one, all-encompassing post of the entire line, but after I got done writing Part I about the Alpha SV and Atom SV and Part II about the Beta AR pants and Stryka hoody, I was already over 1,000 words each. If you’ve not yet had an Arc’Teryx imposed lobotomy, you’re almost there. This is the last post of the series. You’re welcome.

As with all the products I’ve received from Arc’Teryx, I am exceptionally grateful to have been able to try out all the majorly important elements of their “Ascent” product line. Unfortunately, I didn’t receive them until later in the winter season so I haven’t yet been able to test them in a truly extreme environment. But there’s some good news to that: I’ll get to test them out this summer and next winter, when I have a better grasp on some of the more “extreme” hobbies Colorado has to offer. I’ll update this post and add others as needed.

Finally! The gloves! Seemingly, it would make sense that these wouldn’t be my favorite piece of gear. I mean, I can wear the Alpha SV jacket, Beta AR pants, Delta LT zip, and Stryka hoodie all four season probably. But gloves? Probably just winter. I know; it doesn’t make sense to me either. But I have an infatuation with gloves, and I have never ever owned a pair of gloves that I looked forward to putting on. Sure, I’ve had really warm gloves. I’ve had indestructible mittens. Work gloves. Driving gloves. Football gloves. All sorts of types of gloves, but none of them left me wanting to wear them with ever reasonable chance I could. Until now. 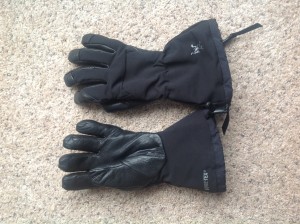 One thing that kept popping up was that the gloves weren’t keeping people’s hands warm. I’m not sure if I’m just very warm-blooded, which could be, or if some of these people had too high of expectations. Yes, if you’re going to pay upwards of $200 for a pair of gloves, you expect certain things. But they are just gloves. Of all my years of sitting in a tree stand while hunting, riding snowmobile without grip warmers, ice fishing, what have you, NONE of my gloves have kept my hands warm for an overly extended period of time without the aid of some external heating source, like hand warmers. So maybe these people were just sitting idle at base camp, but I cannot fathom these gloves not keeping my hands warm while being active.

Besides the obvious task of keeping my hands warm and dry, there are a few other things that I was demanding of these gloves, and they did not disappoint.

Turning cold, wet hands to dry, warm hands. I once had a pair of mittens that were so good that I could shove my bare hands down an ice fishing hole; barely, kind of, sort of wipe them off on a hard shell jacket; and then stick them back in the mittens where not only would my hands be warm and dry, but the insulation would dry as well. I was very young when I had those mittens, and very sad on the day that I couldn’t find them. I’ve not had  a pair of gloves or mittens that could do that since. I think I might have found their emotional replacement. There were a couple of times that I had to take my hands out of my gloves to adjust this thing or that thing before going down a run, and they would become cold and wet. By the end of the run, everything seemed fine and dandy. My hands were not too cold or too wet when doing this so I still have some apprehension. I’ll likely find out next year.

Dexterity. The mittens I just mentioned were warmest piece of handwear I’ve owned. But mittens are mittens and anything requiring fine motor skills or finger dexterity can just be forgot. I’ve had some driving gloves with great dexterity, but they were either uninsulated leather or some kind of liner. Neither of which provided any warmth or weather-proofing. If I did try to get a pair of gloves that would keep my hands as warm as mittens, they were almost as useful as mittens as well. The leather palm of the Zenta AR gloves allow for quite a bit of precision. You won’t be doing any needle point with them, but I could at least tie my boots, clip a carabiner, strap my bindings, and use a screwdriver with them on.

This is my favorite part.

They have a clip-in loop on the middle finger of each hand. This is becoming very common with any gloves that could be used for climbing, but it’s my first pair. And I am in awe.

In a moment, you will see how great the cuffs are, allowing them to be worn over any type of jacket. I still got some snow inside the cuffs on a couple of falls, but thankfully they dried right out.

And now, the moment I’ve been dying to show you, the supremely easy cuff synch system. Putting your gloves on for the first time over jacket is no big deal. But what about when you’ve already put them on, synched them down, and now you need to take them off again? Off is fine, actually, but what about putting them back on? The opening of the cuff is synched down and may not go over your jacket. Arc’Teryx has fixed this problem, and made it extremely easy to use even with a gloved hand.

Simply grab the nylon webbing with your gloved, and as you pull the glove on, the cinch will become loosened, allowing you to pull the cuff over any thickness of jacket you may be wearing. Then, once your hand is back in, grab the cinch chord and tighten. Here, I’ll demonstrate!

And that, is really what makes me happy about these gloves. Not that this system probably unique to Arc’Teryx, but the fact that they have put that much thought into the design, espcially to make it incredibly easy to use with a gloved hand. Bravo, Arc’Teryx.

For my last bit of criticism, I offer this:

Why not add a zip pocket for a hand warmer on the top of the hand? I don’t think you’d lose much functionality. You could use the same taped seams that you use on your other products. It wouldn’t add substantial weight, if that’s even a concern. People don’t have to use it, and it would give those that need extra warmth that ability. Other than that, I plan to have these glove for a looooong time.