Climbing Inspiration: Surround Yourself with Who You Want to be 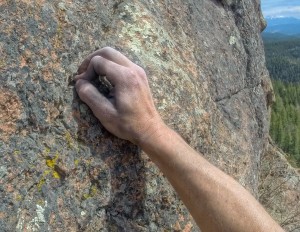 I just got done working a climbing event for Evolv at The Spot in Boulder, and while this may be beer induced, it is still incredibly true. What I’m about to say is not novel or mind-blowing. But when it hits you like a ton of bricks, you’re all like, “f*ck, why didn’t I do this sooner?!?!!” (Or why did I ever remove myself from this situation?)

First off, just being in a climbing gym, when you can’t climb the whole time, and have to sit there and watch while other people climb and the music gets you amped, is torture. Good torture.

I know climbing shouldn’t be a competitive sport. I don’t always view it that way. But that’s who I am. A competitor. Always.

Even when people don’t know I’m competing with them, I am.

I don’t project that onto others though. I don’t care if I climb 3 or 4 grades ahead of you (which is rarely the case here in Colorado; I can’t stress that enough). If you’re stoked to climb, I want to climb with you. I will encourage you to climb whatever it is you want. At whatever level. 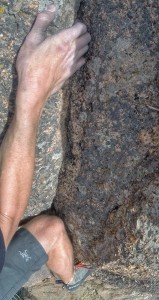 Meanwhile, I am totally comparing myself to you. But not in a derogatory way. I don’t spite you. I don’t wish you ill will. I totally want you to crush your project. Honestly. It’s possible that I want to feel the happiness and rush of you sending your project. Shit, I want to be your belayer on the 20 failed attempts prior. But seriously, I’m judging myself against you. Your success inspires me to push myself to be a better climber.

Tonight, besides the awesome competitors in the dyno comp and the numerous people bouldering much harder stuff than me, I was hanging out with my fellow Evolv athletes. These guys made me feel completely inadequate. Not maliciously. Not intentionally. Just as innocently as I would have done to others in a similar situation.

They were talking about their climbing grades. Not bragging, and not rubbing it in. That’s how climbers talk: “Hey, have you done that 12c called ‘such and such’ yet?!?! It’s f*ckin awesome!!” No dude. Come talk to me about 10c.

I wasn’t mad at them. I didn’t think they were dicks. They were just assuming I was at their level. No harm, no foul. But god, did it light a fire under my ass. I wanted to be like these guys (and one female teammate stopped by that boulders V10). I wanted to be able to push them. And have them push me. I want to be in the gym 3 days a week and climb outside 3 days a week. I want to train like I trained for football. Relentlessly.

And just to shed any possible negativity from them that you may still be perceiving out of context, I eventually did say, “yo, man, I only look at 5.12’s from the ground. I don’t get on them.” To which he replied, “dude, I don’t care if you fall on 5.8. I just want to climb with people that are stoked about climbing.” 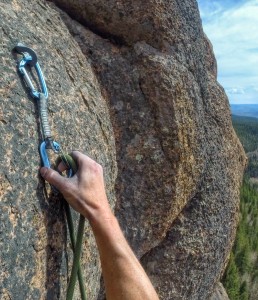 And that’s the thing. Climbers don’t care about other climbers’ abilities. Just as I mentioned about myself above. We just want to surround ourselves with people that want to crush. All the time. At any level.

I, personally, use that fuel to inspire myself. And compete.

But, this comes with a caveat.

I’ve talked to more than several strong climbers that said they had their breakthrough by having someone stronger put them on routes they didn’t think they could do. And pretty much forced them to do it (in a non-threatening way). People have tried to do this to me. Because they assume, “that’s how I did it; that’s how you should do it.” But I’m not wired that way. I have a way I go about things. That don’t scare the f*ck outta me. That doesn’t allow me to flail and flail and project and project. Flailing and failing causes me stress. Distress. And no one learns that way. Not efficiently anyways.

That means I need more practice. Better practice. That means, to catch up to these people, I need to be a little more dedicated to my training. Consistently. And do it my way. That means using the positive enthusiasm I felt by hanging out with such great athletes tonight, every day going forward. That means I need to surround myself with these people. I need to climb with them. I need to let them nudge me, but not push me. And I’ll get there. I’m rededicating myself to climbing. Eating, training, being. The competition is on. And I’m ready for it.

Thanks to my teammates for unknowingly motivating me. Thanks to the climbers that had even less of a clue. I’ll be at the gym at 6:30am from now and possibly after work. What are you doing to keep up? Or distance yourself further from the pack?