I’m flying. Right now. No, not right now, but while writing this. I’m on an American Airlines flight to Chicago. It’s a small plane. An Embraer 170/175. I used to work for a company of one of the component suppliers to Embraer for this very aircraft. We worked closely with this company so I’ve seen many different cabin layouts. Lavish ones. Comfortable ones for the economy class.

But this? This small, atrocious configuration American chose? It’s no surprise flights are being re-directed due to battling passengers.

I can see the new growth coming out of the gentleman’s scalp in front of me. I can see the flakes of dead skin. He also has one gray hair. I feel like I know this man. More than anyone should know a complete stranger anyways. Wait, there’s an empty follicle. He must be starting to bald.

Aside from the up close and personal details of the man’s scalp in front of me, he’s also decided to recline his seat. No worries of another knee-saver battle. I’m only 5’9 and my knees were hitting his seat before he decided recline so there’s no possibility of knee-saver use to begin with…if I even owned one. You can imagine the joy of my pain when he came ramming back.

You should see my posture while writing this. I had plans to work on a freelance project on my 15″ MacBook during the flight. No chance. With the tray table down, I’m barely able to use my iPad, which I’m using right now. It’s so close to my torso, I feel like a t-rex. I am not the only one, and that poor bastard has to rest part of his laptop on his gut. (P.S. My tray table is broke.)

I fly frequently for work and semi-frequently to visit family in WI. This is the worst. His seat isn’t even fully reclined. I can only hope he decides to try and force his way back even further. Maybe I can whisper sweet nothings into his ear as I bare the pain of my knee caps being pinned through the back of his seat. As it is now, the reprieve felt any time he leans forward is that of the ending of a Nickleback song. You know that torture.

I’m not going to pretend I know the financial performance and health of the major airlines to try and guess at the reasons behind their ticket pricing strategies, but I can tell you that Southwest and United are leaps and bounds ahead of American in MY customer satisfaction.

I never have seat issues on United and Southwest. I can usually sit comfortably AND use my laptop even when the person in front of me reclines.

Southwest offers wi-fi and free TV on many flights with their partnership with DISH Network. Drink service is prompt and snacks follow soon thereafter. I’ve been on this American flight for over an hour and the drink orders are just now being taken. Did I mention Southwest is usually the cheapest hub-to-hub airline and you get two free checked bags?

United sometimes has electrical outlets under their seats and in-flight movies. After Southwest, there’s a good chance United is next cheapest as long as you go through online ticket brokers like Cheaptickets.com, Expedia, Priceline, etc. Their flight network is much larger than Southwest too. I really like United if Southwest isn’t going where I need to be.

I’ve flown with American many times since 2006. They used to be good back then, but were still nothing special. Just an average airline doing average things. (Like U.S. Airways nowadays.) Because of that and their increasing ticket prices, this is my first flight with them in a couple years. It was booked through work. I didn’t have a choice. Otherwise I wouldn’t have chose them. Trust me. And you can obviously see how much they’ve devolved.

You can look around and see how uncomfortable everyone is. The only person in the near vicinity that doesn’t have their knees smashed into the seat in front of him is a man that goes about 5’6 standing. Wi-fi? Nope. In-flight movie? First you’d need monitors. Can a guy at least get a free gps flight tracker?! I mean, you don’t offer anything else. At least let me watch a dot crawl across the screen for the next 2 hours. Bonus points if you replace the dot with a little airplane graphic.

Sometimes these things can be overlooked or expected when exceptional customer service or much lower ticket prices are involved. The check-in counter attendants that took my luggage acted like zombies and barely said hi. I don’t think I’ve seen either of the flight attendants smile once. And I know this wasn’t the cheapest flight available.

American Airlines, do better. Preferrably before my connecting flight.

I tweeted this post and tagged American Airlines. They replied, but I really don’t think they get it.

I’m happy they’re upgrading their fleet with newer and roomier planes, but they’re still only offering it as an add-on. I tried asking them multiple times, but they didn’t really want to give me a straight answer. That question being: Why would I pay you extra when I can get it for free with a different airline that also has cheaper tickets????? 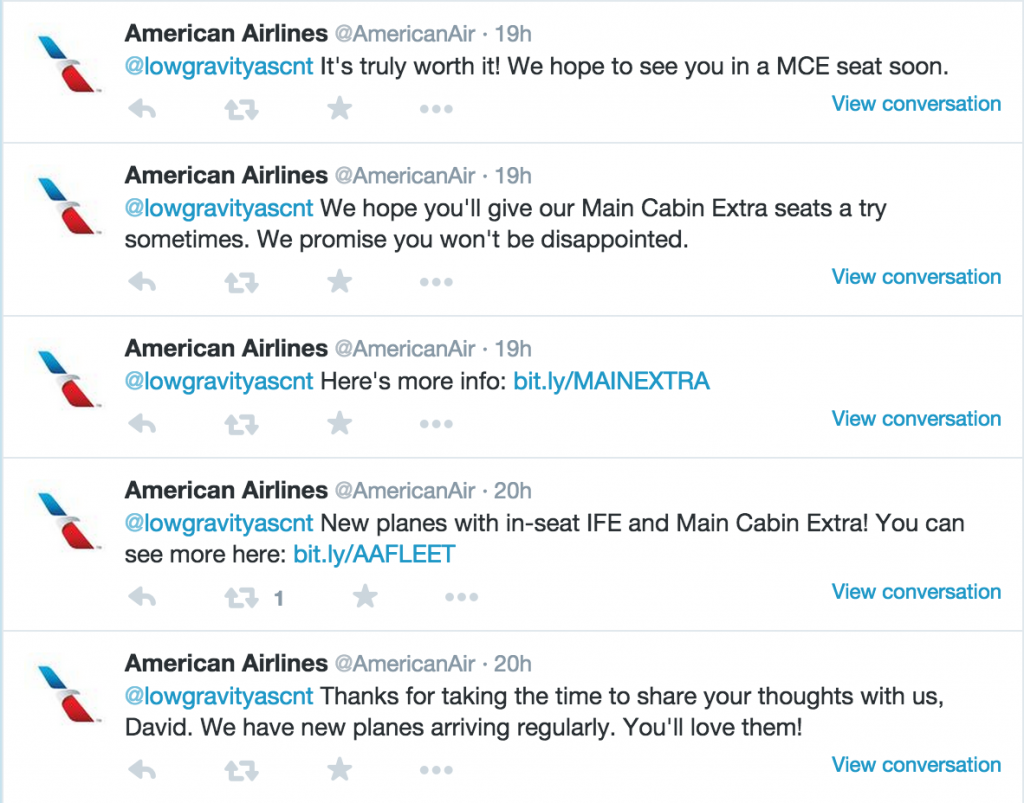