Football Friday: Indoors or Out? Aritificial or Real?

My answer for both of those is outdoors. Football was created outside. Snowy, muddy, rainy games make the experience so much better. And even if you don’t like the elements, you can’t tell me that the game isn’t more memorable. You can’t tell me you don’t remember the 2007 Seahawks vs. Packers playoff game in the snow or the extremely controversial Patriots vs. Raiders AFC Championship game. So friggin awesome. 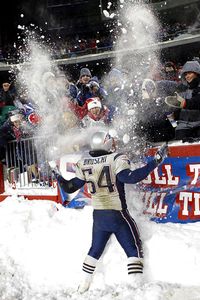 However, if you’re a fair(y) weather fan that likes huge points on the board, then I guess I can see your point about keeping them inside. But seriously, dome games disinterest me so much, I can’t even bring myself to write any more about it. So, moving on… (LoL)

As a player, or spectator (obv), do you prefer to watch games played on natural turf or artificial turf?

This one is really really tough for me. In fact, my original blog post was solely going to be on this subject.

As a player, I have played 99% of my games on natural turf. I went to one skills camp at Camp Randall (UW-Madison – Fuck ’em up, Bucky!) and played one game at UW-Stout on what was called “speed turf”. Basically, it was the first popular artificial turf. Like, an 1/8 inch foam pad over concrete covered with astro turf. Fast? Yes. Painful as shit to tackle/get tackled on? Yes. Screw that stuff. Later on in college, I had the privilege to play on the new hybrid stuff. Looks like grass (but isn’t — duh!) filled-in with tiny rubber pellets. Durable? Yes. Fast? Yes. Soft enough to have 300+ lb. of man meat fall on you comfortably? Yup.

So, it really comes down to the new field turf and natural turf (for me). It feels like I could honestly flip a coin.

From a player’s performance perspective, the field turf wins. It’s fast, you can cut on a dime, it’s not as slippery when wet, and it’s pretty soft to land on. However, because the performance capabilities are higher, your potential for injury is higher if you’re not used to playing on it. Natural turf is just a bit slower. It has to be. You have to be more careful with your footing because you can easily rip up the sod while trying to make a cut and fall down. It does, however, take an edge over field turf in terms of soft landings (as long as it’s well maintained).

From a fan’s point of view, field turf still allows games to be played outside (if that’s your thing) and put up big performances. But on the other side, natural turf allows people to get muddy. And when that happens, that’s when you sort out the physical teams from the high-flying, precise, built-around-speed teams because the physical teams are just going to line up and pound the ball. 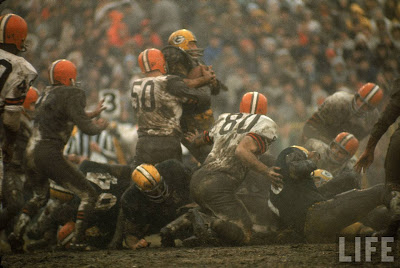 *sigh* I’m just a bit too much of a traditionalist. I like outdoor games. I like muddy games. I like knowing that in this era of passing the ball 30+ times a game, of ginormous contracts, sleezy corporate business tactics, that when it really boils down to the elements and player’s will, there is still resemblence of the old school tough guys that made this game what it is today.

What do you think?