Early on in May (I know, right?) I was contacted by the lovely people of Darby Communications to write a review for some Vasque footwear (which you may notice, I have not yet done either…I know, right?). I used some Jedi mind tricks to convince them to send me an ENO hammock too. Actually, I just mentioned that I noticed they represent Eagles Nest, and they threw the Doublenest in out of the goodness of their hearts. I love people like that; don’t you? 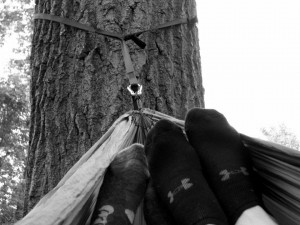 So far, I have brought this hammock with me to two different campsites and four different crags. It’s been smashed between my climbing rack and floated around in a trunk full of gear. There’s been teenagers wrastling around in it and full grown adults using it to hide in the shade. One time, the weight limit was inadvertantly put to the test. The lightweight parachute material is extremely strong. Through all of this, the hammock has held up seemlessly. Well, almost. I’m not exactly sure when this edge began to fray, but it’s not at a critical location on the hammock so I’m not too worried about it.

For lounging, I’m not sure why anyone would imagine bringing anything else to the crag, provided there are trees and/or places to set gear to anchor the ends.

It is by far the most comfortable seat in the house.

The ENO Slap Straps make it incredibly fast to set up. One person can have the hammock swinging in the breeze in less than 5 minutes.

I’ll be 100% honest; I haven’t slept in this hammock yet. But I have talked with a lot of people that say it’s incredibly comfortable. The best tip I’ve heard so far is to make sure you put something under your knees, so they’re not hyperextended all night long, and something under your neck (not your head). I tried this while lounging, and I can imagine a great night would be had. 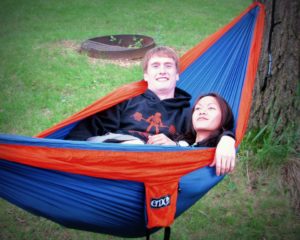 Like every picture of me ever taken, this one, too, makes me look like a turbo nerd. I promise, it’s not always this bad. At least Anh makes the picture bearable.

Sorry, not buying it. Two people lounging while watching the rest of their climbing friends get up the side of the rock? Absolutely. Who likes belaying anyways? (I kid! I kid!) Two people to sleep all night long? Nuh-uh. I’ve tried lying in it with Anh plenty of times to know that I wouldn’t make it more than an hour or two after I fell asleep.

I have seen a grown adult sleep all night long with his mid-sized dog in his Doublenest with him.  That must have been cozy…

At first, a 1lb. 6oz. shelter seems like a rockin good deal. But then you have to add 12oz. worth of slap straps. And another 1lb. for the bug net (required in the upper midwest where mosquitoes carry you away). Finally, 22oz. for the rain fly. When added all together, that’s 4.5lbs. You can get really nice 2-person backpacking tents for less than 4lbs.

Again, I have never had my DoubleNest out in the rain simply because I haven’t used it as a shelter. So, why would I be sitting in the rain in my hammock? That would just kind of be depressing, wouldn’t it?

But let’s revisit my friend with the dog. The night that he spent cozying up to his furry, 4-legged friend is the same night Anh and I tested our Columbia Compounder Shells. Albeit after the initial torrential downpour, it still rained quite heavily, and he woke up just as dry as anyone else that didn’t have a leaky tent. I was impressed!

A DoubleNest will set you back $65, but they are usually on sale at REI or can be found cheaper on Amazon. If you’re looking for a general purpose lounger or something to throw in your daypack to enjoy a scenic overlook while resting from your hike, I think it’s a great price. But again, if you’re looking to make an entire sleep system with the rain tarp and bug net, you’ll be spending about $200.

My final thoughts are this:

I would buy an ENO DoubleNest. For lounging.

The hammock and the straps are light enough that I throw it in my bag anytime there’s even remotely a chance that we will be stopping somewhere to rest or climb for the day. It’s incredibly comfortable. There will be many a naps had in the hammock, and at $65 (or less), that comfort is well worth it.

I would not buy it as part of a multi-day, ultralight backpacking sleep system, and I would not try to sleep overnight with two people.

But to be completely fair and honest, I’m not even sure if that’s its intended use. And if it isn’t, then it’s just perfect!

Just…..go buy it, ok!? I pinky swear promise you won’t regret it.