Make Your Own Adventure

Whether you’re “stuck” in the city or need to visit your family in the country for a weekend with nothing to do, I find it hard to believe you can’t make your adventures. Recently, I, and Chick with Tent, had to visit my parents in rural WI for a myriad of family celebrations: the birth of my father, the birth of my sister, the day to celebrate mothers, and the birth of me.

While the temptation to sit inside and watch all of the gloriousness that sattelite TV has to offer for 48 hours straight (I don’t have cable, sattelite TV, or even over-the-air network reception in my apartment), the weather was beautiful, and there was much else to do.

At first glance, the first thing anyone will notice about my parents’ house is that it’s located right at the mouth of a creek that empties in a large river. Certainly there are things to do, right? Not always. The pontoon boat isn’t in yet, and tooling around in my dad’s fishing boat, smelling the 2-cycle exhaust, isn’t exactly fun, especially when I forgot my fishing license back in MN. (Though, the fumes wafting past my nose brings back great childhood memories of fishing with my dad.)

The property itself is only an acre lot. There’s not exactly a lot of exploring to be had. At best, it’s a relaxation nirvana with two large decks overlooking the water and more flora and fauna than I’d care to maintain. I can only sit still for so long.

I don’t remember the exact order these things happened, but we took a seemingly “boring” weekend and turned it into a day of valuable knowledge and fun activities. 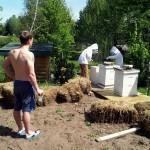 If you stand this close to active hives that are being worked on with this amount of protection, you deserve to be stung!

While we have no immediate use for beekeeping knowledge, it’s fun to watch my parents work with their bee hives and learn about “The Secret Life of Bees”. Some fun bee facts:

1) The queen gives birth to every single bee in the hive.
2) The queen selects the sex of every egg she lays.
3) The only males in the hive are called drones. Their sole purpose in life is to mate with the queen and then die.
4) All of the worker bees are females (which probably explains their erratic temperment; amirite?).
5) If a bee stings you, not only do they die, but they also release a hormone so that the rest of the hive knows to go on attack!

There are plenty more, but I find these to be the quirkiest.

I learned about #5 the hard way. Luckily I ran like hell before they could swarm and got inside at the behest of my parents. The only other option was jumping in the creek….which is only about 55 degrees right now. Burrrr!

Anyways, I can’t wait for the honey this fall!

Anh has recently revealed to me some knowledge she’s had about wild edibles. That’s extremely useful knowledge in emergency situations! We took a walk through the yard and picked young dandelions, clover, and plantain leaves. We also robbed some young cilantro and garlic sprouts from one of the many gardens. Don’t worry, they don’t have outdoor pets or use chemicals on their grass. She also washed everything thoroughly before eating them.

She made a video of our dining cuisine, which was meant to be extremely representive of a backpacking experience.

Last week I mentioned that we spent a better part of the previous weekend watching YouTube videos about different outdoor skills, trying to scratch an adventure itch. We happened across the Swedish Fire Torch. Not only does it look pretty cool, like an outdoor party “decoration”, but it also has a pretty essential camping application: cooking.

The small, center area between the logs directs all of the heat through that open space, making it very intense. We didn’t do it, but you could easily fry food over that fire, and with the right amount of wind and draft, you could probably even deep fry. Perfect for a shore lunch on a weekend fishing/camping trip and you don’t feel like bringing a stove!

To make a swedish fire torch, you’ll need a large, round log. Split it in quarters or fifths, depending on the size. (I suppose this could be done with random chunks of wood if a big log or means of splitting it are unavailable.) Reconstruct the sections as if you were putting it back together like a puzzle. Leave a little space between each log, fill it with tinder and kindling, and start it on fire. You’ll have to keep feeding it with smaller wood and play with the spacing to get the correct draft to keep it going until the main logs are set ablaze. Once they are burning on their own, there’s no need to keep feeding it, just keep the draft where you need in order to control the flame. 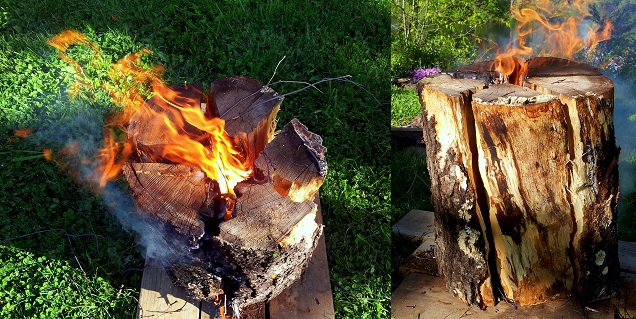 I already mentioned the pontoon and small fishing boat, but my parents have a 12′ aluminum canoe as well. It gets used about twice a year to go the half-mile up the creek before you hit the first shallow rapids. As I grabbed the canoe from its upside down storage position atop my rowboat (lots ‘o boats, eh?), I noticed a lot of rodent sign, not uncommon. I carried (dragged) it down the steep steps down to the dock. As I got the bow in the water, I noticed a family of 4 mice scurrying around! That was just a bit startling, but they were kind of cute. After messing around with them for awhile, we gently dumped them out in the grass. 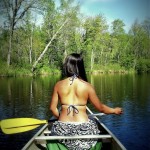 I'm almost certain this is the only time she wasn't paddeling....almost.

Anh, being the photog she is, snapped a bunch of pictures. She even let me try one. To this day, after “living” there since 1996, I am still mesmerized by the beauty of this area once you get past the developed housing.

Local history states that there was a great battle between the Sioux and Ojibwa indian tribes right at my parents’ lot. The Ojibwa hid up our creek and waited for the Sioux to come down the [now named] Chippewa river. As the Sioux passed the mouth of the creek, the Ojibwa paddled out and ambushed them from behind while the other half of their group paddled up from another location down river.

Make YOUR Own Adventure

We took a seemingly “boring” weekend and found many ways to make it profoundly interesting. We honed some outdoor skills, made some new ones, and learned about beekeeping. We enjoyed the wilderness and appreciated all the beauty it had to offer, even in a limited capacity.

It didn’t take an expensive trip to an exotic location. We didn’t have to buy any special gear. And it didn’t take any extensive research. All it took was a little imagination and a little ambition to get out there try stuff! 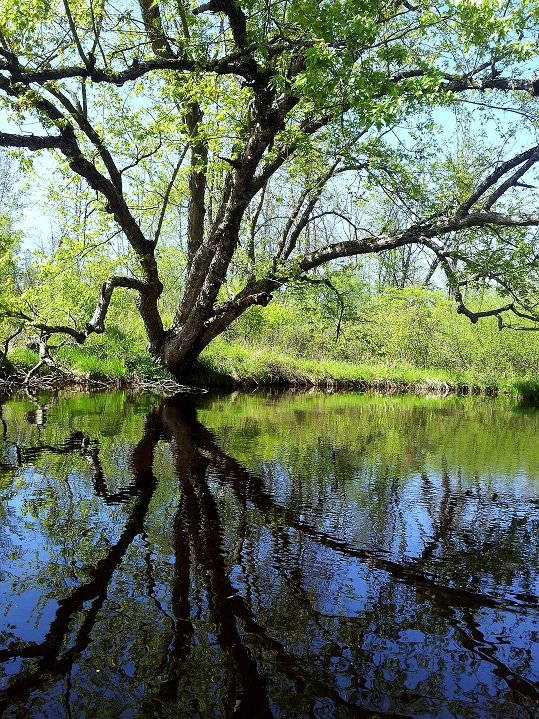