If you remember, I started a “minimalist diet” 3 weeks ago. I need to write something, so here we go…

The first week was definitely the transitional period. I didn’t just flip a switch and dive in. That’s a recipe for disaster (and failure) that most “dieters” fall into. I gradually cut out items in my lunch, added certain snacks when I needed them, and stopped eating huge dinners. I also managed to go to the climbing gym twice and navigate a weekend without eating out of boredom.

The first week was pretty successful. If you need tips for behavioral portion control, let me know. I used some pretty easy tricks.

This week was carried out with masterful execution, but also suffered a set back. (That first part seems like a redundant sentence/statement.) Building on the success of the previous week, I ate even less for lunch, really changed all of my food over to nutrient dense foods, and started to appreciate the simple flavors of delicious food and enjoy any treats that I ate.

The setback came in the form of shoulder pain. The Monday of Week 2 was the first time that I dedicated an entire training session specifically to bouldering. Bouldering is quite a bit more difficult than top-roping so I expected to be sore the following day(s). I was. I couldn’t hardly move my left shoulder. Nonetheless, I thought it was just regular DOMS. On Wednesday, I did a traditional lower body gym workout….which also led to some pretty massive DOMS until Saturday. (Note: climbers don’t have huge legs; I do skwatz and deads for systematic stress and to make sure my butt still looks good.)

My left shoulder was now just as painful as my right. I couldn’t raise either of them. I was a walking pillar of pain, which by no means do I associate with having a good workout, but that didn’t deter me from following my diet. The weekend, however, was an overindulgent mess.

Saturday I went with my girlfriend to a family celebration and ate my weight in Vietnamese food, which is severely awesome (is “severely” the right word to use there?). Then, little did I know that my mother would be visiting my sister just a half hour away and invite us to dinner with them. So, off we travel to the great state of Wisconsin and had a large and amazingly delicious dinner at an amazingly delicious Italian restaurant.

On Sunday, I’m not so sure we left the couch for more time than it takes to go to the refrigerator or bathroom, which, in a 1-bedroom apartment, doesn’t take long. We didn’t adhere to much of anything other than the Seefood Diet. The only saving grace was that I made homemade beef and barley vegetable soup. That probably makes up for eating half a baguette with Nutella, right? At this point on Sunday, I have convinced myself that my messed up shoulders are due to a nervous system issue, not a muscular issue like DOMS, most closely associated with bouldering and sleeping with funky arm positions.

Even after this up and down week, I can see results. The drop in calories and the increased nutrient dense food is paying off. For the most part, I was following a “clean-eating plan” to the “T” for 2 weeks straight. It wasn’t even that hard, up until the weekend. P.S. Typing “clean-eating plan” made me vomit just a little bit. Hate those fuggin words almost as much as “tone”.

Every day I wake up, I make plans to climb or get to a traditional gym as long as my shoulders don’t hurt. It is now Wednesday, and I still haven’t made it to either. Tonight, I vow to get to a gym and try resolve this issue, or at least get down the right path. This will include a lot of testing.

After the weekend of overindulgence and not being able to be active, it’s hard to get back on track. Add in the availability of Halloween treats, and my plan is right back to where it was 3 weeks ago.That’s fine. I will use the same gradual transition that had worked before.

This is the useful part (hopefully). The previous 3 paragraphs were just to allow me to talk about myself. Which, as we all know, is one of my favorite things, besides smiling.

I tweeted last week something along the lines of, “I think the key to a minimalist diet is really appreciating your food, which is hard to do when it’s so abundantly available.” During Week 2, as I mentioned, I was really starting to buy into it. I was eating ‘little’ food, but I was genuinely enjoying it, almost savoring it. I wasn’t taking it for granted. It felt like I was connecting with my food, rather than just devouring it because someone put it on a plate and set in front of me. Which, if you look at my original post, is a pretty hippy thing to experience. If you can connect with your food on that level and truly appreciate the flavors and the nutrition it provides you, over eating doesn’t come into play. You appreciate the food, you eat all that you need to satisfy yourself, and then you put the fork down.

Here is an example of what I mean: 1 bowl of homemade split pea soup with barley, 4 toasted baguettes with melted brie and prosciutto, and half an apple for desert. I was perfectly content and stopped there. (Yes, there’s 2 bowls there. Anh decided to join me in this….to which she has lost 3 pounds in 3 weeks.) 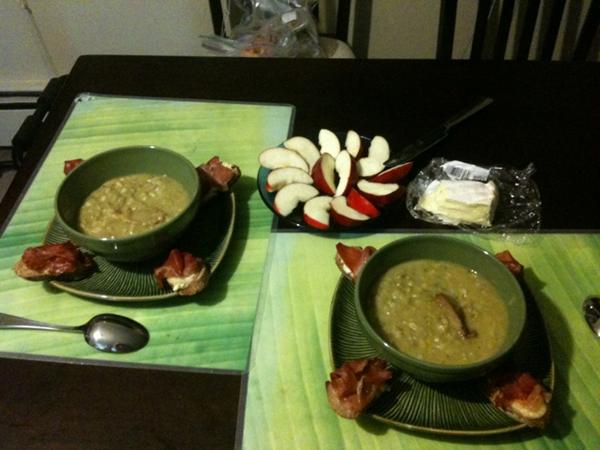 A minimalist dinner for two

The next thing that should be obvious is that success begets success. During a climbing session in Week 1, I had one of my best performances ever. I climbed nothing lower than a 5.10c and finished multiple 5.11’s. In fact, I was almost considering trying to find a 5.12. (Those are all advanced routes, 5.12’s being the hardest in the gym.) Even though I find nothing wrong with Chipotle burritoes (as we all know), I didn’t want to go out and have a calorie dense meal. I wanted to stick to my plan. The following week when I went bouldering, I was attempting V4’s (just breaking into the intermmediate difficulty levels) consistently. Again, it was a great performance (for me), I had stuck to my plan earlier in the day, and I could have afforded a calorie dense meal. But why? My performance was increasing, my diet was getting better and better, and my stomach was getting leaner and leaner. Why even tempt myself with a possible let down?

The next obvious finding is that failure begets failure. Since my shoulders have prevented me from climbing and working out, my performance has obviously gone down. You would think that would motivate me even more to stick to my plan. I am a human, and I do suffer the same traits as many “dieters”. Because my activity is down, it’s easier for me to justify to myself that it’s ok to say “awe, f*ck it.”

So what is all of this saying? What’s the common trend?

For me, the message I’m getting, and the quote that is continually running through my head when I’m actively thinking about this stuff is, “your brain is connected to your body.” This little nugget was given to me by Frankie Faires at The Movement Coaching seminar. At the time, I didn’t get it. I “got” that your psychology plays a role in your physiology, but the exact statement of “your brain being connected to your body” was kind of lost on me. It’s becoming much more clear to me now.

Now that I’m “starting over” again. What comes first: stick to a diet or hit the gym? Well, today I did both. *pats self on back*