First, meet Pamela (and Jay, he was there too, amongst others).

I’ve really been confused ever since Pamela decided to follow me back on Twitter. I mean, I follow a lot of pro athletes, and the only two that are silly enough to return the favor are Pamela and Brody Leven. Logically, my initial thought is that “they’re just doing it to be ‘personable’”. You can imagine how surprised I was when she actually interacted with me! “A pro? Talking to me? Get ouuuuttaaa here.”

Wait, this is about climbing. Right.

So, after a couple more interactions, it turns out she loves climbing Vedauwoo, WY (and if you know who Pamela is, this is no surprise to you). Vedauwoo is only 2 hours from Boulder, and I had been there a couple of times with my buddy Keese. After two or three failed attempts, I finally got up there to climb some wicked f*ckin off-widths with Pamela. None of which looked like this:

So anyways, I’ve climbed very short sections of off-width before as part of longer lines, and I’ve found them to be enjoyable. A little bit of a strugglefest, a lot of muscle grunting, and some minor pain endurance. I don’t know why I like that, but I do.

Before I showed up, I told Pamela that exact story, and that I had not ever done a true off-width climb. This made her happy. Why? She enjoys watching people suffer. As one of the best off-width’ers in the world, there’s no shortage of that for her.

The plan was to “warm-up” on a 5.9 off-width with a lot of “classic off-width technique” called Someday, Kids, this will all be Yours. I watched two seasoned vets pretty much just walk up that thing so I was feeling pretty confident.

But first, the end of the story: I got home and found out my warm-up was actually a 5.10. And prior to that, I had attempted a 5.10c chimney/face/hand-crack called Skybox. Great. Burnt myself out on a 10c (which is probably equivalent to a Boulder Canyon 5.11c/d), and now doing my first full off-width on a 5.10, which deserves a separate grading system all on its own.

It’s true; it did have a lot of classic off-width technique; I never felt like I was going to fall out of the crack; I didn’t fall; but I think there might have been “a lot of tension on the rope” in some spots. I’ve also never breathed so hard, never worked so hard to gain 6”, and never wanted to quit a climb so much before in my life. And this was the warm-up. Hahahaha!

The memorable quote of this climb is: “So, you’re telling me that you guys climb like this for fun? You know there are such things as hand cracks and crimpers, right?!?!”

This is the first time I almost exclusively used heel-toes, arm bars, and gastons for the entire climb. Thank goodness I was lent an elbow pad.

You won’t find “Spins” on Mountain Project, and I don’t have the Vedauwoo guidebook so if it’s not in there either, I’ve included a beta picture here for reference: 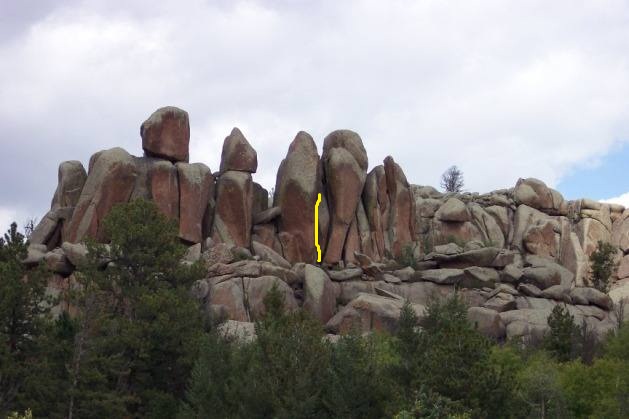 The first person to try this line is one of the guys that “walked up” Someday Kids, this will all be Yours, and even he needed a couple of takes . It’s entirely vertical with a section that is slightly overhanging. And just when you think you’re almost done, you have to do an impossible…spin…to get left-side-in instead of your right.

I tried my hardest to blend into the background and not have to climb this line. I was feeling pretty done-for after the first two climbs. Pamela wouldn’t allow it. And the stupid rain held off just long enough for me to lace up my shoes, tie in, and get 2’ off the ground. 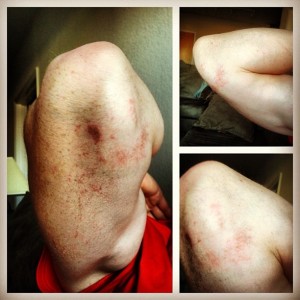 This crack was wide enough that instead of using an arm bar, I used a real high chicken wing the entire way. What people that have never OW climbed before may not realize is that even though the “out” side of your body looks vertical and parallel with the crack, the “in” side of your body is nearly perpendicular. That includes your leg. You can’t see it while watching, but the leg that is in the crack should ideally be completely perpendicular to your body, or as close as possible. You then use your foot as a camming device (that may or may not hold). This puts INCREDIBLE stress on your quads, hip flexors, and groin. Which leads to the memorable quote on this one:

“In all the sports I’ve played, in all the years I’ve played them, I have NEVER felt this much stress on my tissues (muscles, ligaments, tendons)!”

I finally got up the damn thing. It took a lot of patience from my belayer. I had to ascend the belay line to get passed a “mini-crux”. And I’m pretty sure I had some assistance in other spots too. But nonetheless, I still made it up, mostly under my own power. An 11b. On my 2nd off-width ever. In Vedauwoo. That is something to be proud of. At least I am, and that’s all that matters.

Climbing with the pros

So, if you’ll finally let me get to the title of this thing I will.

The fact that Pamela had invited me to climb with her at all already let me know she’s down to earth. We joked a little before I got there so I knew she was genuine. I knew she wasn’t going to be fake and “just let me watch her climb” while I sat there like a lump on a log. Even still, I was blown away by how grounded, chill, supportive, and patient everyone was. It was like I was “one of them”. As if I was an elite level climber too. But I’m far from that. And it didn’t matter.

I never once got the feeling that I needed to “show-off” or do anything I wasn’t comfortable with, but when I’m around people of that caliber, I can’t help but go all out. The constantly being evaluated, constantly needing to perform, constantly needing to be better than everyone psychology has been so deeply engrained into who I am that I can’t shut it off, even when it doesn’t need to be on.

That, and perhaps what I’m about to say, is more telling of my past experience in sports more so than whom I’m with now, but I don’t get that kind of drive or inspiration while climbing with other people. This will sound horrible no matter how it’s worded, but when I climb with others I climb for the fun of climbing. I’ll do 5.7, 5.8, 5.9 all day if that’s all my partners are interested in. I’ll lead 10’s and 11’s if I know the area, or I’ll follow 10’s and 11’s if it’s in a known tricky area and someone else wants to lead them. But in general, I try to keep my climbing low stress. I tend to not push it. My psychology (and fear of leader falls) is totally different.

Climbing with Pamela, Jay, Danny and the rest of the people really flipped that competitive switch. I wasn’t competing against anyone, but it sure felt like that same part of my brain. It felt good. Real good. The masochism required to climb off-widths felt good too. The combination of “needing” to perform and to have an all-out, physical fight with a giant piece of granite felt like something that’s been missing from my life for quite some time. Other forms of climbing require finesse and delicate footwork. Off-width climbing requires a bad attitude and the ability to give a giant “FUCK YOU” to the rock. (Sorry, not censoring that one.) When all else fails, jam and push and pull and smear and do anything you need to do, physically and mentally, to move up another 3 inches.

The day after, I could barely walk. I have road rash on both shoulder blades, a little on my right knee, and what you saw on my chicken-winging elbow. My arms hurt, my abs hurt, and my groin hurt. I have not felt like this since my last hard-hitting football practice. And I only did three short climbs.

Just due to the proximity of all the glorious trad and sport climbing to where I live, I don’t think I’ll ever become known as an off-width climber (or “known” for anything for that matter), but I know for a fact, I’m going to need a regular dose of this. I’ll be back for more.