I’ve only very casually been watching the splitboard scene until recently, but it seems like anyone that is serious about it at least mentions Voile, if not outright owning one. I had the opportunity to interview them the recent Winter OR Show as well take it out for a demo ride the Snowsports Industry Association’s (SIA) Snow Show. They’ve had their Artisan model out for several years now and seen great success so I was pretty much already sold. But after meeting with them and being able to try it out first-hand, I can definitely recommend this splitboard to anyone.

Made in the USA 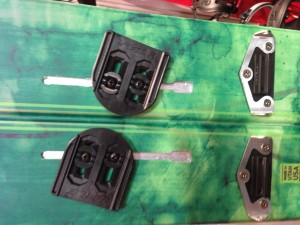 For those that don’t know, Voile is based out of Salt Lake City, UT, and all of their manufacturing is as well. You can feel good about local when you buy their products. And now they’ve taken it one step further. The Revelator core is made out of Paulownia wood, which is mostly found in China, but it is being grown in the Southeast U.S. too. Which mean a majority of their raw materials, if not all of them, are also harvested from U.S. soil. I’m not always a big “made in the USA” kind of guy, but when I can support local jobs at a cheaper price, it’s an absolute no-brainer.

Alright, so, now that we all feel good about buying an American produced, American made snowboard, let’s talk about why you should be buying this thing in the first place. With more and more companies jumping into the splitboard mix, it was time for Voile to bring some more innovation to the table. What they came up with was the Revelator and Revelator BC (backcountry). (Frickin cool name!) 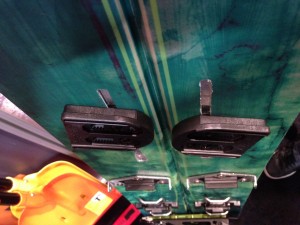 Maybe hard to tell, but the pucks are tapered for a more natural and better riding position.

Both models have a new channel puck system. Rather than mounting your bindings in predetermined hole patterns, there are two machined out channels in which you can slide your pucks back and forth to get a true specific, customized stance width. Not only that, but the pucks are slightly angled to put your knees and ankles in a better riding position. They also made it a lot easier to get out of your bindings with a new quick release system, allowing you to release both straps with one simple pull. At first it seems like a novelty, but then you try it, and you realize how awesome it really is.

Getting back to the construction, the Paulownia wood is lighter and just as strong as traditional core materials. They’ve encased that in carbon glass and elongated the cambered area underfoot. Add to that an early rise nose and a 7mm taper in the tail, and you have a lot better performance in the deep backcountry powder – skinning up and floating down. And speaking of skinning… 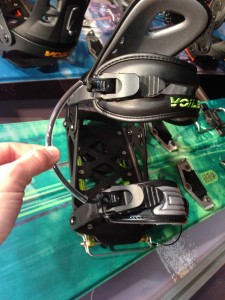 New fish scale bottoms for the Revelator BC!

These won’t replace skins altogether on steep terrain, but for lower angled approaches, there’s no need to mess around with skins. And if there’s flat traverses after a sweet pow run, don’t worry about having to get your skins out just for 100 yards. Cross Country Skis have had fish scales for years and years and years. It only makes sense that they’re finally showing up on backcountry touring gear.

As I said, I actually got to ride this magnificent creature. Specifically, “just” the Revelator (not Revelator BC) so I didn’t get to see if or how the fish scales would affect downhill performance. And I wasn’t too sad about not being able to try them skinning up the mountain at Copper either. I didn’t have time nor ambition for in-bounds skinning. Haha!

What I can say about the downhill however is that I was completely blown away. I don’t know if you’re at all like me, but I was fairly skeptical about a snowboard split in half and clipped together being able to perform as well as solid, single snowboard. Not only was I wrong, but I was way wrong. It was the best board I rode all day. 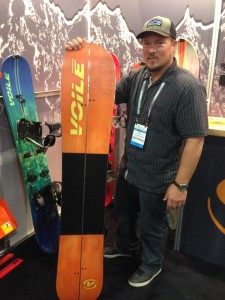 I was able to carve and feel the edge dig into the groomer and hold it. It also had enough “pop” to allow me power through some sharp transitions. I didn’t stay on the groomer long until I got into some sweet, sweet untouched powder in the trees of Copper Mountain. It had snowed 20-some-odd-inches the days prior, and this was a magnificent way to test out its powder capability and maneuverability.

To that date, in the 11 months since I had been riding, I had never had such a good tree run in my life. Turning became second nature and the board responded with every torsional flex and kick. I even got some sweet air on my exit from the trees. And when I say sweet, I’m talkin a good 8″. Yeah. THAT sweet.

The only deficiency that the Revelator revealed was in its bindings. Halfway through the tree run, the toe strap came off the end of my boot. I was cranking pretty good through the trees, but that’s something that could actually cause you to end up *in* a tree if you weren’t ready for it. I explained this to the reps as I returned, and they seemed aware, or not surprised, by what I told them. They explained that they are currently in the process of designing and testing new….designs….until they get it right. As it turns out, binding companies don’t share trade secrets exceptionally well. And probably rightfully so. I have no doubts that by the 2014 season, they’ll have this all figured out. And then you’ll have one badass piece of backcountry setup.