#VanLife: Battle of the Vans

When I talk to people about how stressful buying a van is, I get a lot of really odd looks. Mostly because people still can’t comprehend living in a van. I mean, why would you want to live in a van and go play in the mountains everyday when you could be saddled with a $300,000 mortgage and job you hate that sucks the fun out of everything?? Oooohhhhhhhh….

So for however long it’s been since I last wrote about #VanLife, I’ve looked at no less than infinity Craigslist ads, test drove an ambulance, drove 4 hours to look at a van that was falsely advertised, begged friends to go look at them for me while I was in FL, and had one sold out from under me before I could go look. I’ve not been sitting idly.

If I had abajillion dollars and the mechanical aptitude of a mechanic, I’m sure I’d have a van by now. Sadly, I’m short on both of those things and have to heavily rely on my friends that are. But anyways, that’s not the point of this post.

The point of this post is offer up two different options that are likely to get bought within the next day or two. Both have pros, both have cons. Let’s start with the one I’m going to look at tonight.

To be fair, I don’t even know what this looks like yet. My van expert Derek texted me this morning and said, “I got something for ya. A 1978 Chevy Step Van. It’s a little bigger than a Sprinter, and it can hold a queen sized mattress AND dirtbike at the same time. I also have all the parts to convert the engine to EFI. It’s only $1,200.”

Well, all that sounds great except that I don’t actually know what a step van looks like right off the top of my head. I consulted Google.

This one looks pretty cool. Militaristic even. Like a tank kind of. I can deal with this:

But then there’s the ones that look like creepy ice cream trucks. I’m not sure if I can even: 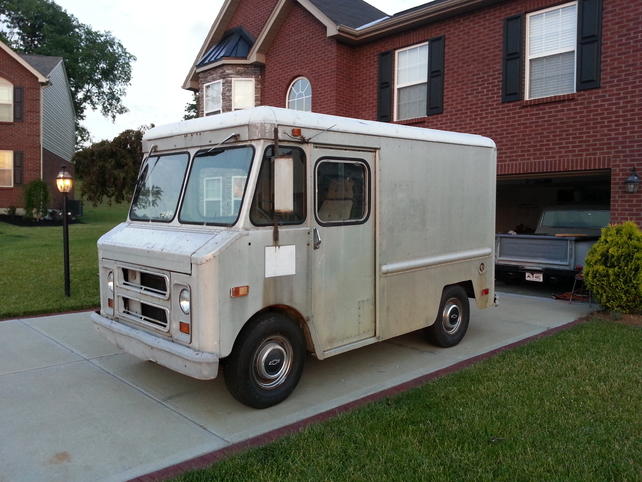 The good news is that it’s local, Derek has all the parts for the engine, it’s big, and it’s cheap. The bad news is that it might look creepy. Even if it’s not super creepy, is it really the image I want? These answers will get answered tonight.

I only have this weekend to make a purchase until mid-September. There’s been no shortage of vans on the market since I’ve been looking, but you know, having a van is fairly paramount to #VanLife. It’s the biggest piece of the puzzle. And for me, just having that locked down and sitting in my driveway would really put my mind at ease.

If I don’t buy the creepy ice cream truck, is this worth 20 hours of driving?

Don’t get me wrong. All the stress of finding the perfect home is a nice stress to have considering everything that encompasses #VanLife. But for the time being, damn, man, can a guy just buy a van?!?!

Which one would you choose?