I feel bad that I haven’t written more about my trip to Jordan quite yet. I’ve continued to post pictures of our journey on Facebook, Instagram, and Twitter to keep the stoke for this amazing country high. It’s just, spring time in Colorado is magical. It’s not too hot; it’s not too cold; and there aren’t any bugs. We have unicorns prancing from rainbow to rainbow, and pleasant little mountain nymphs playing their flutes.

Kidding. I’m just going through my annual re-fall in love with climbing thing where that’s all I think about every waking moment. And if I’m not thinking about it, I’m actually doing it. Also, camping. Mostly camping and climbing together all of the times.

Anyways, I was going through my Jordan pictures again (because that’s what I do nearly every other day it seems), and I saw the ones from visiting Wadi Rum. If you have no other reason to visit Jordan than Wadi Rum, you’re not doing it wrong. I could spend weeks just in this area alone. It was like nothing I’ve ever seen before, with it’s seemingly flat, powdery sand and MASSIVE sandstone features appearing out of nowhere, for no reason. It was Mars on Earth. And quite possibly the most beautiful thing I’ve ever seen.

The sandstone was endless. You could spend a hundred lifetimes climbing here. And never make a dent. You could get lost ducking in and out of the various canyons of this 280 sq. mile reserve without a guide very easily. Though, that might be your intent. And I wouldn’t blame you.

There’s something freeing here. I can’t quite describe it. Maybe because this land was settled 10,000 years ago. And I can imagine probably looks the same. 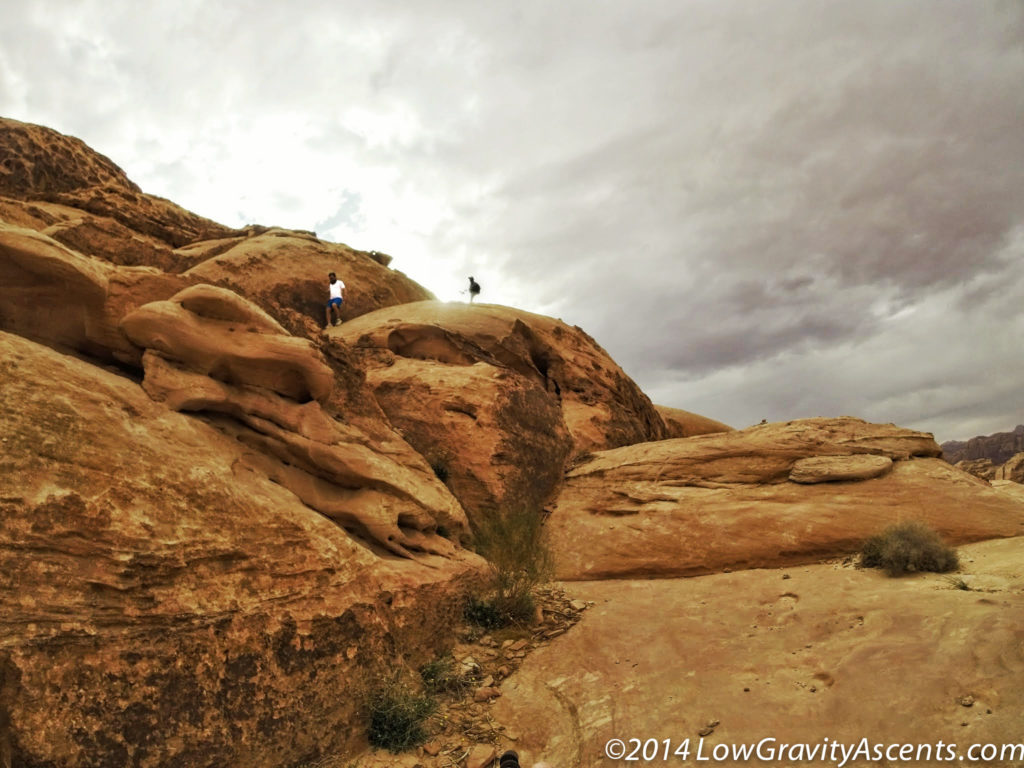 The local Bedouin guides and hosts were some of the friendliest people we met the entire time in Jordan. They started playing pranks and jokes nearly as soon as we showed up. After they served the bottomless glass of tea, that is. We weren’t exactly roughing it, despite being in the middle of nowhere. 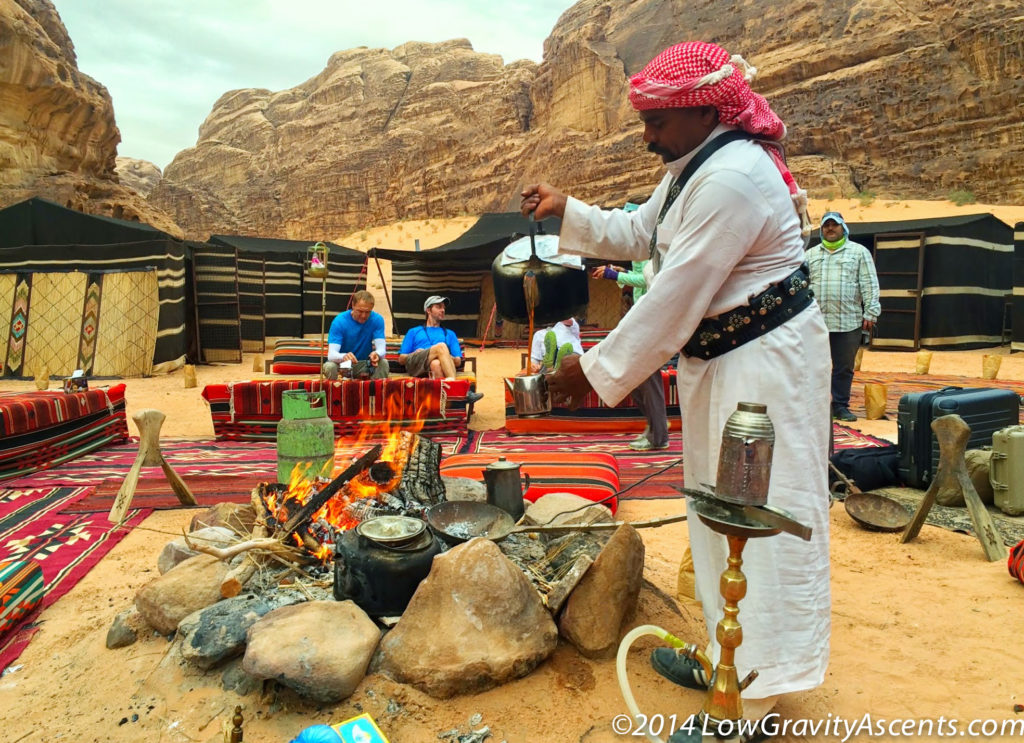 After tea time, I made friends and decided to partake in some traditional hookah. 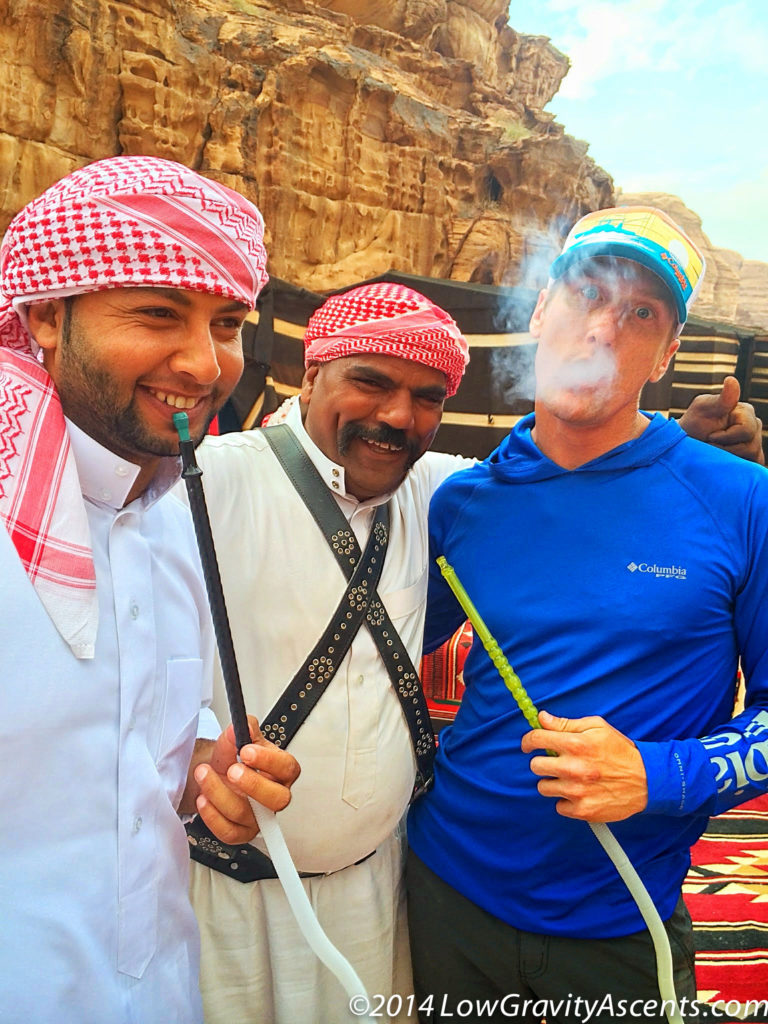 By this time, everyone was exploring. There were so many wonderful things to see. But while I enjoyed a comfort of the tea and the relaxation of the hookah, I was enamored by the sounds.

That soon wore off, and it was time for my own exploring. It didn’t take long to find everyone playing on the rocks above our camp site for the night. It wasn’t hard to understand why. I witnessed the most awe-inspiring sunset I have ever seen. 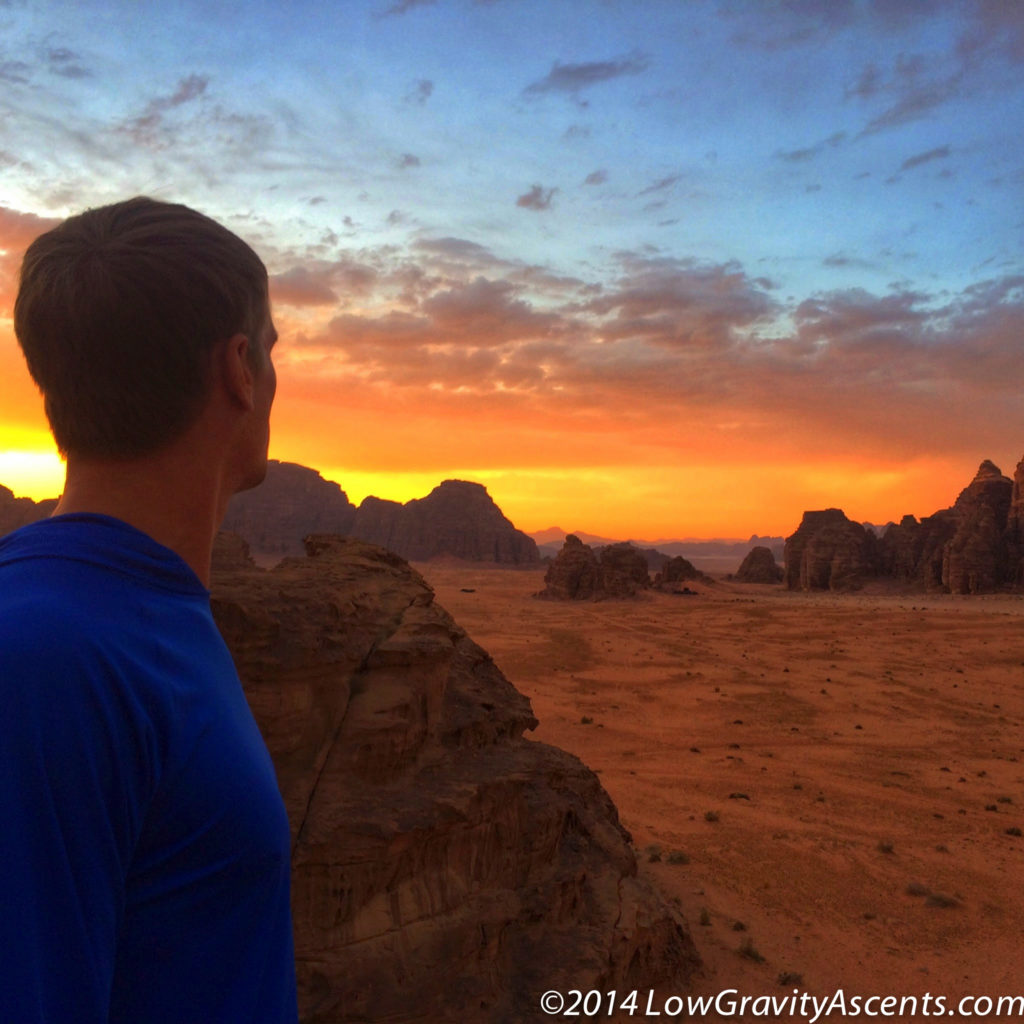 After that magical scene, it was finally time for a traditional Bedouin dinner. Our lamb and chicken were buried in the sand with hot coals and left to roast for hours while we were out playing in the desert all day. When it was time to eat, the meat was succulent, tender, and moist. Afterwards, our hosts started playing and singing more music. It wasn’t long until they were dancing. And then we were dancing. Not as Americans, but as the Bedouins. 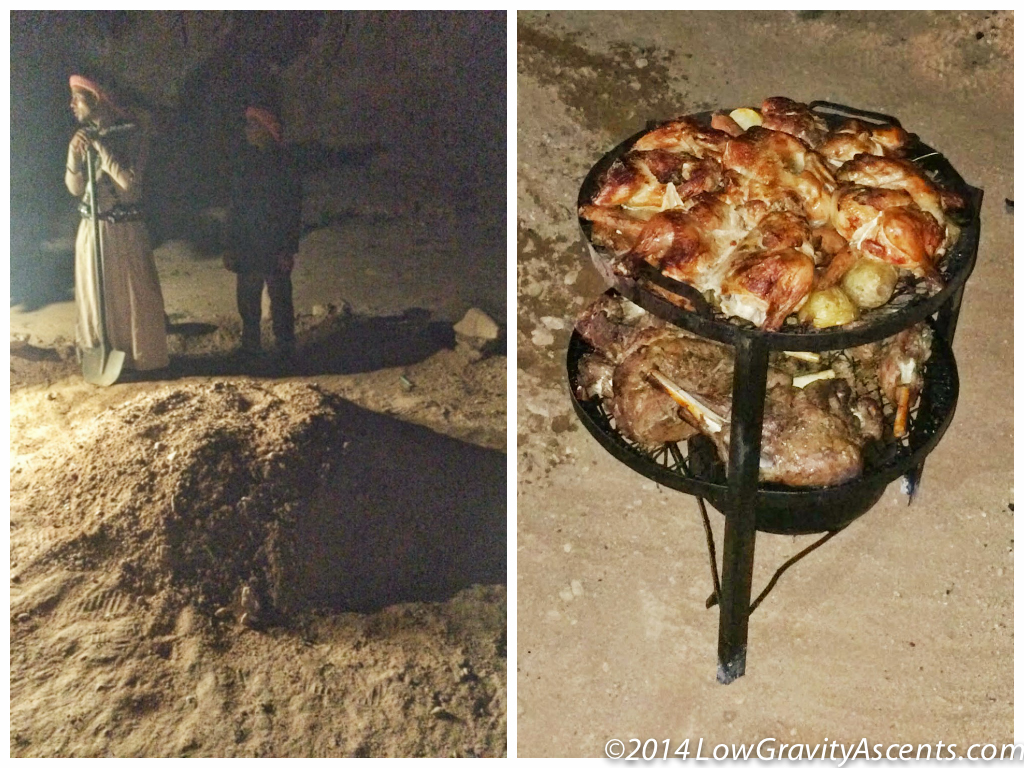 As the evening dwindled away, we watched Shaboola roast, grind, and brew fresh Arabic coffee with cardamom. And of course, more tea and hookah around the fire. The night ended perfectly with several of us deciding to sleep under the stars instead of in the tent. We stayed up just a bit later with our hosts and had a memorable time with more jokes and laughter that went on into the night.

The next morning was undeniably bittersweet. We weren’t ready to leave yet. But with Columbia running the show, you know it’s only going to get better.

We didn’t have breakfast at the camp, but yes, we did have more tea before we set off on our camel ride back to the bus. 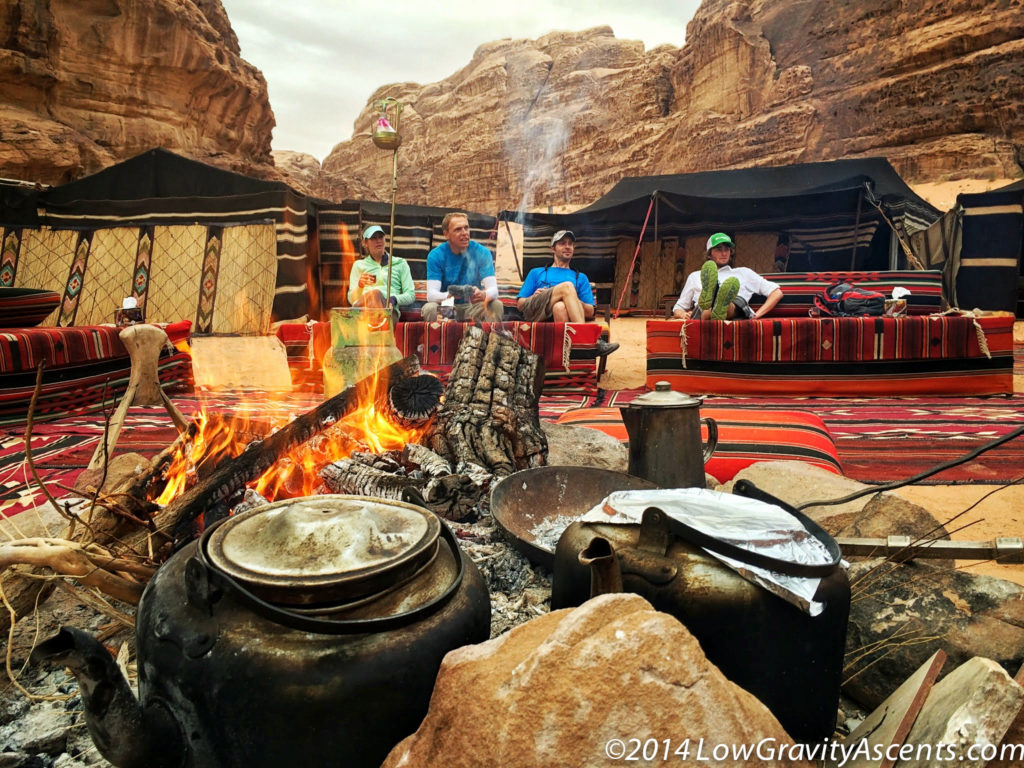 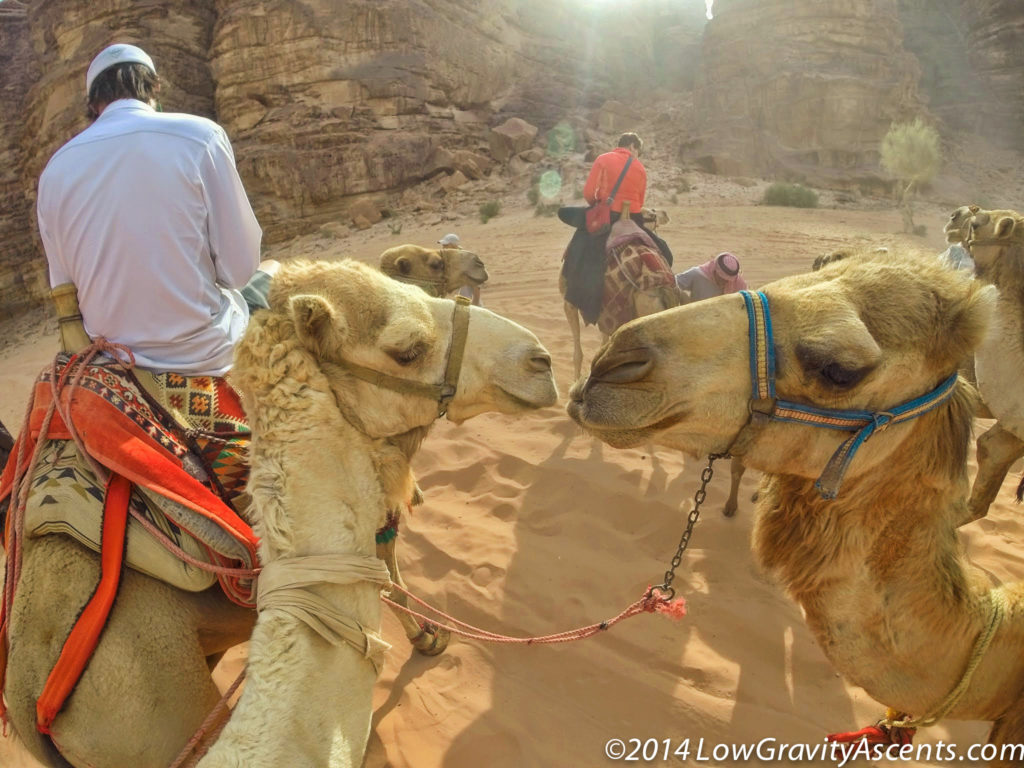 I don’t know if my camel was a male or female, but I like to think it was a female. She was very loving and willing to get to know me, which is more than I can say for my real dating life.

And that’s Wadi Rum as best as I can put it. The whole Jordan experience is too surreal for words, much less the best part of it. I purposely wanted to say as little as possible and let the pictures and sounds do the talking for me. This is one place I will never forget and will absolutely be coming back. The climbing community is growing here rapidly with many developed routes and areas already, and as I said earlier, there is no lack of new exploration to be had. I highly suggest you do.