What to do with so much Kale

Since my garden has started to produce more kale than I know what to do with, I thought I’d publish an ongoing post in which I update it with new and exciting things to do with kale. It’s not always all about me, so I want to share your kale recipes and cooking methods too!

I could easily go on Pinterest or Googles and find abajillion different things to do with kale, but I want your original ideas (or heavily modified recipes). I’ll start with mine and add yours as you submit them. You can do that by leaving them down in the comments, emailing me through my contact page, Facebook message or post, or my direct email (if you’re a lucky person that has it). Don’t forget to include a link that you want me to include to give you credit!

And now, I shall organize all the kale recipes like a menu as such: 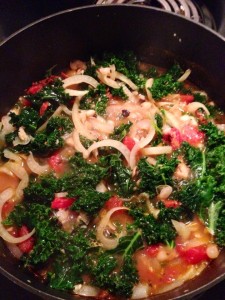 Fennel, Tomato, and White Bean Soup with Kale recipe (rolls right off the tongue doesn’t it?)

I got this recipe from a friend on Facebook, and then I made it better…

Make your own chicken stock with real chicken and add the meat to the soup.

Roast bell peppers and a jalapeno to the existing list of veggies.

Use kale instead of spinach.

Use roasted tomatoes instead of the plain tomatoes it calls for in the recipe. 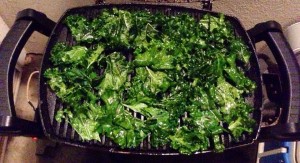 Brush kale with oil on both sides.

Spread in a [mostly] single layer on the grill. Watch closely so as not to let them burn. Flip when needed. Should be crunchy in 10 minutes or less.

Brush one side of the naan bread with your favorite type of cooking oil, add a little salt, pepper, and other favorite dried spices and toast that side on the grill.

Once it’s toasted to your desired crispiness/darkness, remove it from the grill, brush the other side of the bread with oil, and then top the toasted side with your favorite sauce, kale, other vegetables, cheese, and/or protein.

Return it to the grill (untoasted side should be down) on the lowest setting, close the lid, closely monitor for darkness of your bread or melty cheese. 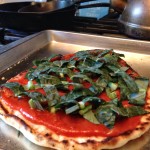 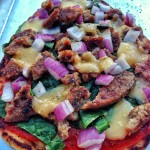 De-stem and wash kale; chop into small strips. Bring a pot of water to boil, cook spaghetti as directed; drain pasta and set aside in a large bowl.

Cook chicken in large saute skillet with a bit of olive oil and salt and peper, to taste. Once chicken is cooked, remove from pan and set aside to cool. Once cooled, cut into bit sized cubes.

In same pan, add a bit more olive oil and bring pan to medium heat if cooled. Add garlic and onion; saute for a few minutes until slightly brown. Add chopped kale; cook for a few minutes or until kale is completely wilted.