I met with Zeal Optics this spring because let’s face it, who doesn’t like meeting with reps from top of the line companies? It was just slightly more convenient since Zeal is also based out of Boulder, and he suggested we meet at a Biergarten. Ok, fine. 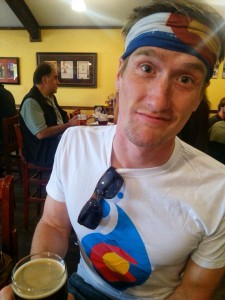 See, just by having Zeals on my shirt makes me look better. Right?!

I left the Zeal offices with their Brewer sunglasses with no expectations or demands of a review and a simple request to keep the conversation going. If there’s one thing I can do, it’s converse like an All-Star . (You see what I did there?) You have yourself a deal, Zeal. A Zeal Deal!

While it is true, these are just sunglasses – they’re not safety rated, can’t stop bullets, and don’t prevent destructive laser beams from shooting out my eyeballs like Cyclops – they performed really really well while hiking 14’ers, spring snowboarding, climbing, extreme downhill trail running, and mountain biking. Also, looking good in public. True story (as hard as that may be to conceptualize).

You see, if I’m going to tell someone to pay a premium price for these glasses ($129), I wanted to make sure I abused them as much as possible before doing so. And I did.

I normally HATE wearing sunglasses while climbing. They seem to either get in the way, or the lens somehow distorts the rock in such a way that it messes with my depth perception. If you remember, I said that about my Stage Ideas goggles too. I don’t know what’s going on in the lesser-quality lens factories around the world, but as soon as I step up to a higher-price, higher-quality lens, I don’t have any more issues. 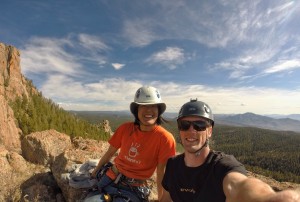 The Brewers made it through this climb.

While climbing in the Black Hills of South Dakota, I was climbing in a shady area and hung them from my shirt. I was at the end of pitch 2 when I looked down, and bloop. There goes my sunglasses. Fantastic! They fell about 50′ down the pitch and nestled nicely amongst the sharpest granite known to man. I had my follower pick them up as he went by, and there’s just one teeny-tiny scratch. Not bad!

Yup, just about anything works here. I like them for hiking because I at least have the piece of mind that if I’m going to lose expensive glasses in the nature, they’ll decompose should no one else find them. Again I reiterate, they look good too. Which makes me look good. And that’s good.

I don’t suggest wearing simple sunglasses on a bluebird day in January, but then again, I’m just a noob that still falls on his head while launching off sweet jumps. I wore these while snowboarding in May (MAY!!!! – Sorry. That was a first for me. I get a little excited thinking about that.), and I had no issues seeing the terrain. See afore mentioned concern with lesser-quality lenses and depth perception issues.

C’mon, you thought I’d wear these things for 3 months doing everything I do in the mountains and think they were perfect?! Psshhhht

Do I look smug? I think I look smug. I blame the beer and the snowboarding in May.

Yup. Whether it’s being active while mountain biking or extreme downhill trail running, or just simply looking down when the glasses are propped up in my head, they have a tough time staying on my face.

Zeal tried to prevent this with their Proflex Design technology, but there is still room for improvement. Looking down with a vibrating face will definitely rattle these off your…face. Before anyone says, “yahsure, that’ll happen to any sunglasses,” hush yourself! I have yet another review for different sunglasses in which this is not an issue.

Should You Buy Them?

If you’re like me, vanity is a real world concern and issue. I’ve had dozens of $10 gas station  sunglasses that function well enough, but at the end of the day, none of them perform like the Zeal Brewers. On top of that, the Brewers look infinitely better than anything I have ever owned. So, are they a bit spendy? Yes, compared to the gas station. NO, if you compare them to other leading brands. In that case, they’re on the low end of the price spectrum AND better for the environment. That’s cool with me.

When it comes down to it, I get a great looking pair of sunglasses that I can wear out on the town to fit in with the hipsters, AND I can wear them doing some of my favorite activities. This is the paramount reason Zeal designed the Brewer: to fit seamlessly with an active urban and wilderness life. 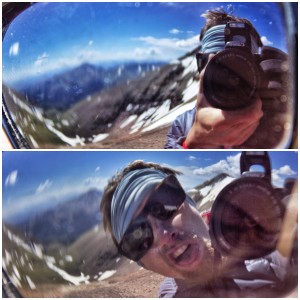 Full disclosure: I received a press release from Zeal Optics, contacted them out of the blue, had a beer with their rep, and then we wandered over to their office in Boulder. I walked away with these glasses for the price of free, but there were no expectations, no promises of a blog post, and all the opinions expressed above are my own.