I’ve always claimed that mountain biking was my 3rd favorite outdoor sport, but I don’t know, man. My new 2016 Specialized Stumpjumper FSR Comp 6Fattie might be changing that. My previous bike, a Giant Anthem-X 29’er, was stolen a few weeks ago, and while I loved that bike too, the Stumpy has already blown that thing out of the water.

This bike retails for $3,500 so it’s positioned right at that more than a casual rider, but still just a ‘weekend warrior’ price point. The 2016 models were released in late 2015 so I actually bought my bike as a used rental from the local bike shop. It was meticulously cared for and other than the scrapes and scratches you’d expect on the pedal arms and bottom bracket, you could barely tell it was used. I got one helluva price on it, which really helped since I was working within my insurance claim budget. What a great way to get more bang for your buck! 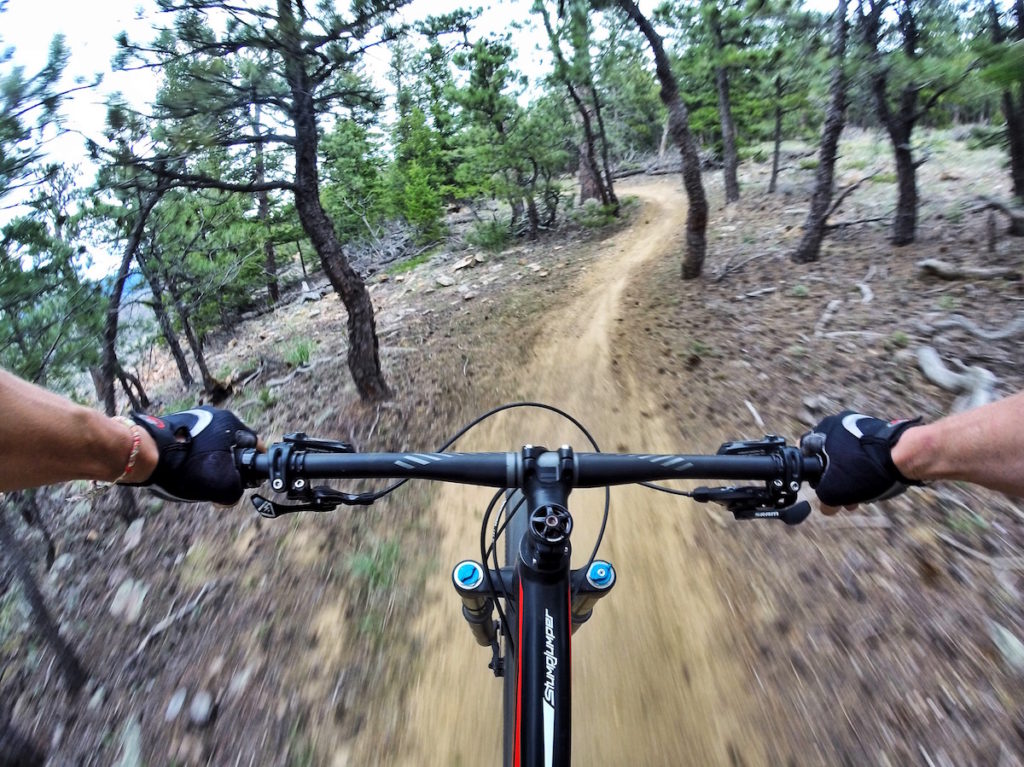 The first thing I noticed about this bike was the fatty 3″ wide tires. They’re much wider than a standard tire (typically 2.1-2.25 inches wide), but still narrower than a typical fat tire (that start around 4″). That does add a little weight to the bike, but mine is running tubeless tires, which helps, and there is at least one other weight savings (coming later).

The advantage of plus-sized tires is simply more surface area on the ground for increased traction. I can tell you, I have never gone faster and felt more comfortable and in control while screaming downhill with my hair on fire.

Another concern of mine was downsizing from 29″ tires to 27.5″ tires (650B). My first bike was the old standard 26″ tire and after upgrading to the 29’er, I really enjoyed the ability to roll over virtually anything. I was still able to roll over everything on the moderate trail I rode, and I think the plus-sized tires helped, but I did notice that it wasn’t quite as smooth and efficient as the 29’er. I highly doubt that’s going to drive me away from enjoying this bike, but it is noticeable.

At the tail-end of my ownership of the Giant, I found an affinity for dropping off stuff.

The Anthem is a true cross country bike and the front fork only had 100mm – 110mm of travel. While that was great for 95% of the trails I rode, I still wanted something that could handle bigger things more frequently.

The Fox 34 Plus Performance has 150mm of travel, and I’ve already bottomed it out. It felt so good! But when you’re not hucking off drops and jumping off rocks, there’s a 3-way tension setting for more moderate trails or completely locked out on the rare paved trail.

The same is true for the Fox FLOAT in regards to the 3-way setting. One for hucking, one for moderate trails and climbing, and completely locked out. The 135mm of travel also provides a nice, soft cushy landing.

As I mentioned earlier, the other noticeable weight saving to this bike is the 1×11 drivetrain. My first bike was a 3x front cassette and the Anthem was a 2x front cassette. In both cases, the larger ring just ended up being an expensive bash guard. On the Giant, I rarely used my granny gear, but there were times. Which was my only hesitation with 1x, but I was already considering that anyways. It’s just going to make me a strong rider I thought.

Anyways, I did find myself on a very long, though not steep nor technical, climb, and I was very pleased with the low-end. On the way down, I didn’t even hit the highest gear for maintaining momentum up slight inclines before another down. 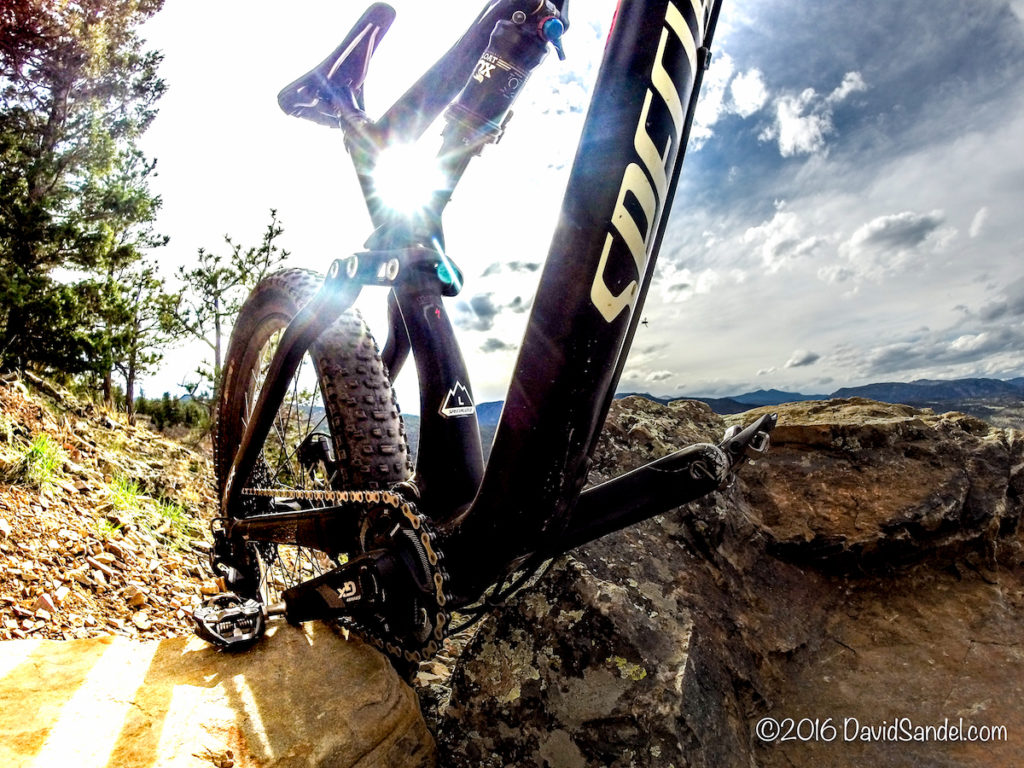 Man, what an unnecessary invention. And now I can never own another mountain bike without it.

I’m going to assume you’re like me, and don’t know what a dropper seat post is. Otherwise this section just isn’t worth it. Basically, instead of a solid, fixed seat post that is only adjusted to one height and then locked down, this one is designed more like a shock with with a sleeve and seal. No, your seat post is not actually a shock that will allow you to bounce on a cushion of air as you ride down the trail, but it does allow you to adjust the height when you’re climbing and when you’re in downhill mode, which is where it really shines.

There’s a control on your left handlebar where the shifter used to be (because remember, this is only 1×11; there’s no need to shift the front ring), and all you do is push it in while sitting on the seat to lower it and when you want to raise it back up, just stand on your pedals, depress the lever again, and the seat automagically raises back up.

So, since the trail I was on climbs 1,000′ ft. before you get any downhill action, I started out with it all the way up in the locked out position. Once I started downhill, I didn’t even consider adjusting it. What for? Fixed seat posts have been a thing since forever.

But then I found that the trail builders added some fun little jumps in the middle of the trail on the way down (probably to slow down the less daring and less experienced riders), and every time I’d go over one and catch air, it’d feel like I was going to go ass over tea kettle because the high seat post kept my center of gravity up higher. Then I remembered the dropper and lowered my seat about 6″. Wow. I could keep my center of gravity so much lower now, which allowed me to go faster, which allowed me to get some sweet little air time over these jumps, and still maintain perfect control. You need this in your life. 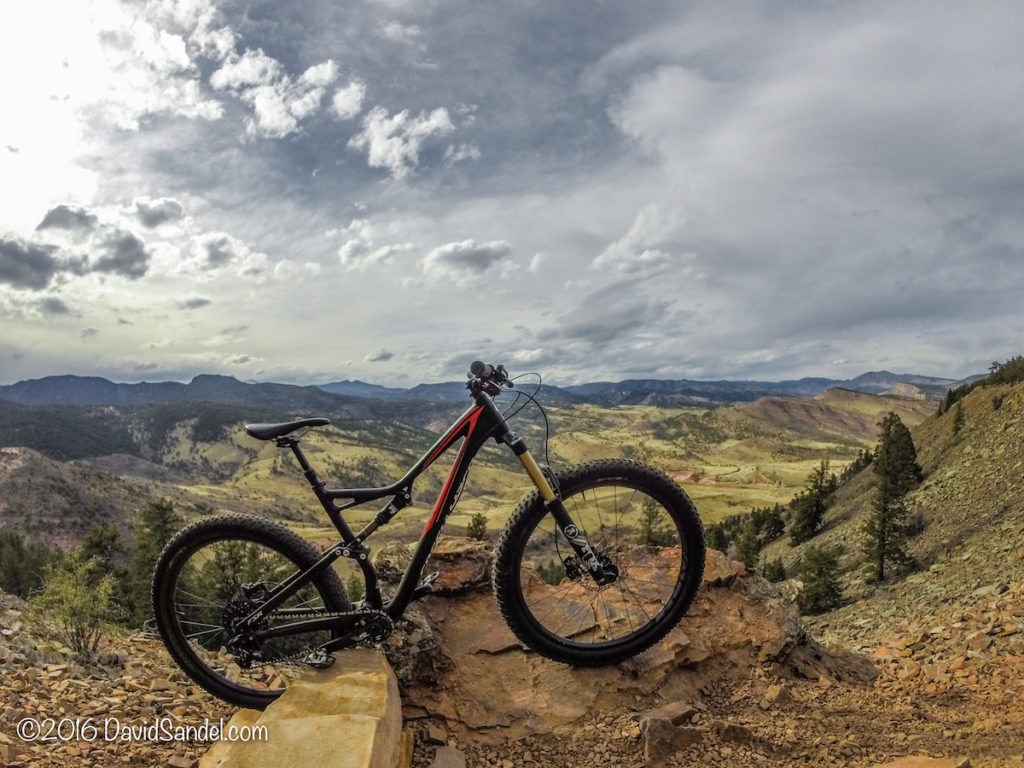 My Initial Reaction for the Specialized Stumpjumper FSR Comp 6Fattie

Well, if you can’t guess how I feel about this thing yet, I’m going to make it very obvious for you:

It’s true, the trail I took it on is very moderate, if not beginner, so there is still time to find something that could be improved, but in terms of downhill, imagining more technical terrain, I don’t think there’s anything this bike can’t handle.

But now imagining more technical flat sections and climbs, I will be interested to see how it performs on tight switchbacks, rolling over steeper obstacles, and just steeper climbs in general. The added friction due to the added surface area could pose a challenge. But then again, maybe I’ll just get stronger because of it.