If you’re looking for a beta spray on those routes, this is not your post. Check out this guy’s Hallett Peak Trip Report. I didn’t see it until I got back, but he did a wonderful job and took all the relevant pictures that we did not. If I had seen it before we left, I’m sure our trip would have went a little more smoothly.

Nonetheless, for my first alpine, I think everything went really well and no real scary spots.

The approach was quite easy. (Shhhhhhhhh! Don’t tell anyone else!) We started at the Bear Lake trailhead and strolled the easy 2 miles up to Emerald Lake. We paused for about 30 sec. to take a look at where we were headed (Hallett is in obvious plain site by now) and continued on. There’s a about three-quarters-to-a-mile of easy scree field scrambling and just a couple of short snow traverses. We were at the base of the climb in no time. 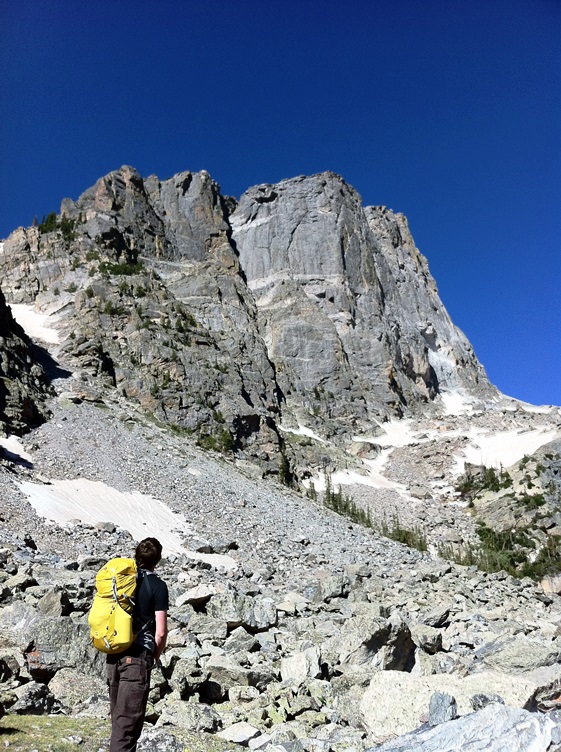 The weather did not suck all day.

We were considering several bottom route variations and settled on Great Dihedral, a 3-pitch 5.7. We flipped a carabiner to see who got the first lead, and as it turned out, I won. I solo’d up the first Class IV/V scramble and then waited for Keese to join me. We had actually thought that first “pitch” was supposed to be more technical. But since it wasn’t, Keese allowed me to take P2 as well.

Now, about these “3 pitches”. Let me back-up a little. During the planning phase of this climb, we decided to go with Keese’s 50m, “9.something” rope as opposed to my ginormous, beginner’s 10.8, 60m rope. On top of that, for a reason I did not understand at the time, we decided to leave some gear back at my apartment to lighten the rack. We still had a complete rack, but as you will see, more would have been better. Getting back to the climb…

After I lead “P2”, we were actually on the top of what was supposed to be P1. Now it was Keese’s turn to lead. Remember that shortage of gear? Yup, we had to stop short of the actual P2 anchors and setup another belay because we ran out of pro.

I’m a nice guy, and I would have gladly allowed him to lead up the 2nd half of P2, but due to some anchoring awkwardness, it was just safer and easier for me to continue on and lead the next part. According to Mountain Project, this was the best climbing on the whole route. I felt kind of bad for “stealing” it.

I made it to the belay station for the start of P3, but due to the confusion of intermediate belays, we didn’t actually know that at the time. We thought we had gotten off route. Turns out, we were right where we needed to be, but hindsight is 20/20 (I don’t even really know what that is supposed to mean). We rappelled down to a big ledge traverse and walked over to some Class III scrambling up to the headwall.

Because we were running out of time (already “out of time” if this were a typical summer day I suspect), we opted for the fastest, easiest route: The standard route.

I had already gotten the honors of first pitch and “best pitch” so I really wanted Keese to lead the rest of the way, or at least the first and third (final). He got the first. I got the second. And what do you know: lack of gear turned P3 into two pitches. Once again, I stole all the glory by finishing the climb. Oh well, such is alpine climbing, I guess.

All in all, it was a completely stress-free, euphoric day. I was completely comfortable leading and with everything we did. It was a great intro to alpine route, and I absolutely loved the approach. I’m not much of a hiker. Hahaha! 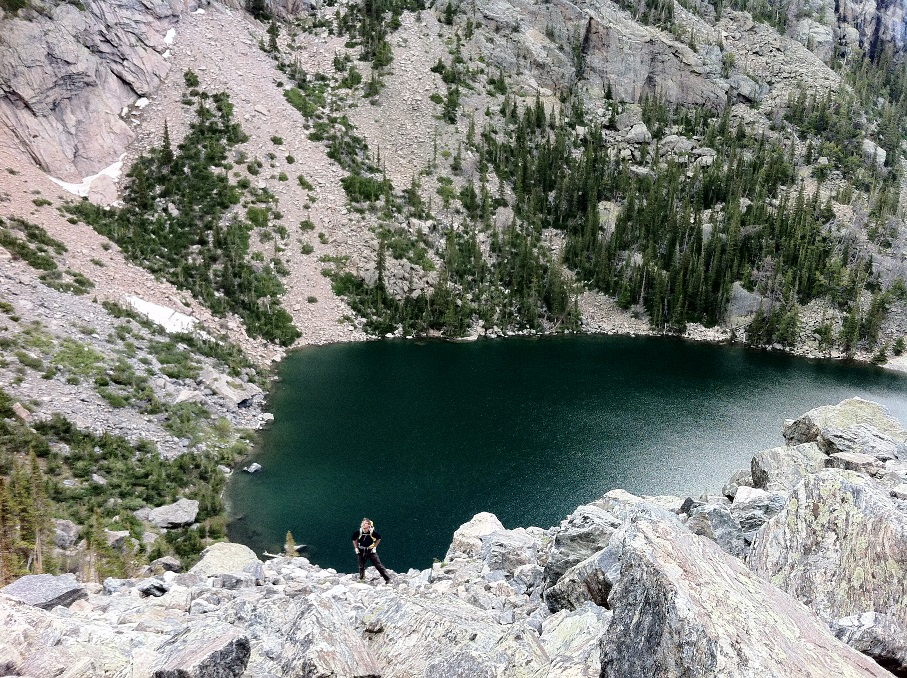 Keese, looking back at our climb with Emerald lake behind him.

The big takeaway from the day was this: if one has useful gear, one should bring gear (and not leave it behind).