I try really hard (regardless of what it may seem) to not post “this is what I did today” type posts. That’s very “bloggy” and online diary-esque. While this site is a blog, I’m in a little bit of denial. I like to think of it as a website that provides useful information or at least topics that make you want to think deeper on the subject. But like I said, I’m aware that I might be a little delusional.

So, today I’m going to fully “embrace the blog”. Firstly, because my weekend was pretty fun, and secondly, because I’m just trying to get back into the swing of writing those supposed informational/though-provoking posts (whether that’s accomplished or not) on a semi-regular basis.

I can’t get into too many details for what will be obvious reasons, but I went out on the town in Boulder for a co-worker’s birthday party. We came, we saw, we drank beer. Really, the only reason I mention this at all is because it sets up the exhaustion for… 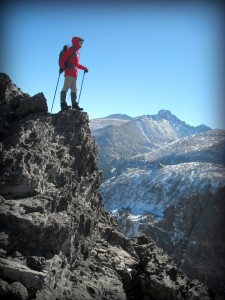 After the night of drinking and fun with the guys, it was time to get up at 4am to go for a hike on Flat Top Mountain in Rocky Mountain National Park. I was joined by peak-bagging extraordinaire, “Summit Air“. It was a perfect day for a hike: sunny, warm, and no wind below the tree line; noticeably colder and a lot winder above. A fantastic opportunity to try out the Millennium Flash shell I received from Columbia.

It wasn’t quite cold enough or windy enough to really say I’ve “tested” it yet, but it was much, much, much better than the base layer/t-shirt combo I was wearing below the tree line. Once colder, snowier weather hits (hopefully SOON), I’ll have a full review. I do have some things in mind already.

After we got done taking pictures and admiring the vast beauty of RMNP and Hallett Peak, we headed down, stopped for a coffee in Estes Park, and then I went straight to “Toasted Coconut Brown Ale Collaboration Release Party” from good friends at Großen Bart Brewery and J Wells in Boulder. I may be a little biased, but the bearded dudes make some bodacious beers. I’ve had their stout, coffee stout, and now the coconut brown ale. They’re community funded so don’t hesitate to help out, or go to Volta in Boulder and try their Chin Curtain IPA. (All their beers are named after different styles of facial hair. “Großen Bart” is German for “Big Beard”.)

The coconut brown ale was so good that I bought a growler and brought it to Heather and her boyfriend Will’s Halloween party to share. The people that tried it loved it.

And speaking of the Halloween Party, I finally got to put some more Twitter names to actual faces. I had recently met Heather (AColoradoGal), Kristie (wigirl4ever), Whitney (Whitneyio), Aleya (AleyaJean), Heidi (runaroundaroo), and Abram (AbramHerman) on a hike, but now I got to meet Lynne (lgsmash), Lauren (MountainLauren1), and significant others too. If you’re ever invited to a party hosted by Heather and Will, don’t eat ahead of time. In fact, starve yourself. Those two didn’t sit down until the end of the night because they were too busy shoving delicious food in our faces. It was glorious.

I didn’t get to sleep until midnight on Friday night and not until 1am (I think) on Saturday night. After all the beer, all the schmoozing, and all the hiking, I was exhausted. It only made sense to get up at 8am to go snowboarding at Loveland, where I’m a proud season pass holder.

There’s only a handful of runs open, but for October, the mostly man-made snow was still very respectable. If you remember (which would totally shock me), I only started riding 8 months ago so I was incredibly happy to make it through the day without any falls, could still ollie without breaking my head, and even practiced riding switch. Also ecstatic that I can now get the world’s greatest Bloody Mary’s again too.

Oh, and I learned that it’s really hard for me to ride when a song I REALLY like comes over my headphones. It’s too hard to concentrate on boarding and jam to the song at the same time. Ha! 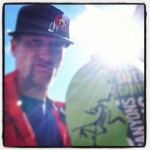 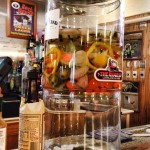 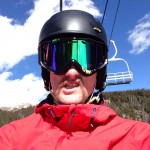 This made me decide to shave

And to top it all off, I watched the Packers annihilate the Vikings once I got home.