I recently went to the winter Outdoor Retailer (OR) Show for the first time ever and had very little clues as to what I was doing. This is what I knew:

I accomplished all of these things and more. But this post is not about my OR experience. This post is about my interview with Arc’Teryx and their Fall 2014 lineup.

Being winter and my current obsession, the first thing I asked about was their new backcountry ski gear. I was brought to the Lithic Comp jacket and Lithic Comp pant. 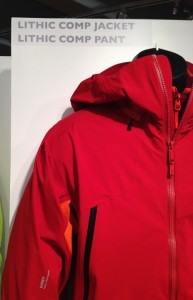 Granted, I’ve been snowboarding less than a year so I’m not up on what every manufacturer is doing for every sport they represent, but what I saw was incredibly cool. I’d say innovative, but like I said, maybe someone else is already doing it, and I just don’t know it.

Arc’Teryx took into consideration that during your uphill charge, you’re likely going to sweat. A lot. But on your way down, you’re going to have that sweet sweet powder splashing against your legs and torso. What they came up with is Gore® Fabric Technology hardshell bonded to their proprietary Trusaro™ softshell material. Your sweaty bits are covered with the Trusaro™, but your chilly bits (when being hammered by pow) are covered by Gore-Pro. 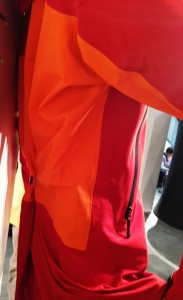 The Trusaro™ is under your arms and sides as well your entire back. The Gore® Fabric Technology covers your hood, shoulders, and the front of your torso. But don’t worry, the chest zippered pockets open up and there’s a mesh liner that allows air to flow through the front of your jacket too.

On top of all of this, they also used their 3D ergonomic molding to give you the best freedom of motion wherever you need it. When skinning up the side of a mountain, you want to be able to use your poles and extend your arms in front of you. In the pants, you want to be able to bend your knees without causing that awkward junior high “high water pants” issue. They used this common sense notion to give you more room in the shoulders, thoracic spine, elbows, hips, and knees (long live the Oxford comma!!) to give you the freedom you want while moving, but still fit perfectly in all the right places when you need it.

The jacket comes in at $45o, and I forgot to ask what the pants were going for. Both are available in September of 2014. 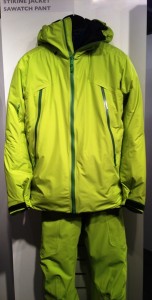 Sorry, kids, there’s not much to add about the Stikine jacket. It’s the “dumbed down”, insulated version of the Lithic. There’s no Trusaro™ softshell areas or Gore® Fabric Technology. It’s just bombproof Gore-Tex® that’s guaranteed to keep you warm and dry in the harshest conditions. But the cool thing about this jacket is that the Thermatek™ insulation is bonded to the shell. This will alleviate cold spots created by settling insulation. I hate those things. Just like gnats.

The Macai Ski Jacket is the Stikine Jacket on D-bol. You’ll only get the d-bol reference if you’ve ever dabbled in the fitness world. It’s steroids, ok?! It’s a freakin insulated, waterproof, breathable shell on steroids! It doesn’t have the softshell bonded to hardshell technology like the Lithic, but it still sports all the same 3D ergonomic molding and fit and full-fledged Gore-Tex® technology.

What sets this apart from anything that I’ve ever heard of (again, not saying it doesn’t already exist somewhere else), and the Stikine, is that it’s down insulation baffled with synthetic coreloft insulation bonded to the Gore-Tex®. This bad boy is for those extremely cold days above the treeline, and retails for…wait for it…are you sitting down?…. $850.

But if I can say anything about Arc’Teryx, it’s that you get what you pay for. Also, no pictures of this bad boy. Click on the link above to go to the website, mkay? 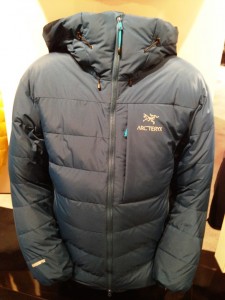 Now that I’ve got all ski and snowboard nonsense out of my system, let’s talk about climbing. Please?

Internally, they (Arc’Teryx) call the Ceres Jacket the “do-everything workhorse”. It combines synthetic coreloft insulation in the high moisture areas like the shoulders, neck, armpits, and wrist cuffs with 850-down fill everywhere else. Oh, and did I mention it has a wind-stopper shell? It does. Can anyone say “belay jacket from Zeus himself”? I’m sure there’s more than a couple people stuck in the Polar Vortex that wish they had this jacket.

I’m really excited to tell you about this jacket. Why? Because I knows a sekret about it. But you have to wait for the end of this section to find out. No skipping ahead!!

This jacket is the Lithic Jacket of the climbing world. It combines the softshell and hardshell technology but in different areas. Whereas the Lithic has Gore® Fabric Technology on the front of the torso, the Alpha Comp utilizes the Trusaro™ softshell material there as well as the back. The Gore® Fabric Technology is only on the hood, shoulders, top of arms, and waist. Why? Think about it…

As a climber, you’re not getting sprayed with snow. You may get snow/ice/water dripping from above (hence, “GFT” on the hood and shoulders and arms), but it’s not coming at you horizontally. There’s no need for “GFT” in those areas.

So now you want to know my sekret???

Full production of this jacket isn’t scheduled until later this year, making it available for September 2014. HOWEVER, there will be a limited amount available to purchase online from the Arc’teryx website on February 15! As in, 16 days from right now! And that’s enough exclamation points for one paragraph.

As usual, Arc’Teryx is on the cutting edge of extreme mountain wear. Their products are top-notch. And while the price tag may be hard to swallow, I guarantee…GUARANTEE…there will be a moment when you realize it’s worth every penny.

And just because I’m obsessed with packs, I wanted to take ALL of these home with me. All of them! 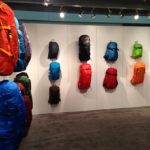 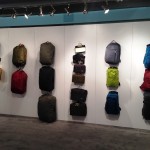