How was that title for a little Google SEO action? Not bad, eh? Too bad I don’t actually know anything else about SEO. It would probably help my other site too.

(You know what “it” is. The title is self explanatory.)

I purchased my Big Agnes Storm King  0-degree down filled bag in early October, right before Justin, Mat, and a couple other dudes went up to the Boundary Waters in Northern MN. I knew that the low temperatures would only get to the mid-20’s, but I was still in the market for a 0-degree bag to accommodate my winter camping hopes and dreams.

Up until this time, I had been rockin’ the same sleeping bag system I got when I was 12 and in the Boy Scouts. Big, heavy, and cotton (with some other synthetics but mostly cotton) was not what I wanted to drag with me. My other sleeping bag is a cheapo, 55-degree Guide Gear. Oddly enough, this has been an outstanding bag for me. Anyways…. 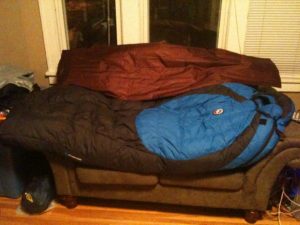 I’m a tightwad when it comes to gear, and that means I take care of it. Rather than keeping it in the storage stuff sack, it lies flat on my love seat at all times unless I have company.

As I mentioned in my first post, I am a real person with a real budget. Spending money on a bag that I can primarily only use in the winter and late fall was something hard to swallow. And since I am a real person with real [little] vacation time my usage is limited to weekend warrior status, probably only being used a handful of times in a year. The monetary value of a good 0-degree down filled bag was going to be hard to swallow regardless of manufacturer. I ended up getting it for just a little over $200 with sales tax. (I was originally budgeting for $275’ish.)

I went down to the local gear shop, Midwest Mountaineering, to take a look at some of their bags. My choices were pretty much Kelty (down or synthetic) or Big Agnes. Even though I could get a -30-degree synthetic down Kelty, the Big Agnes had a few features I really liked.

The thing I really like about this bag is that Big Agnes purposely designs wider shoulders than most other mummy bags. This allows more room to bring in extra clothes, boot liners, water bottle, whatever, while you sleep. This was the main selling point. Also, coming from a rectangular bag, I was concerned with being able to sleep on my sides. The extra room makes this problem nonexistent.

The other huge feature the Big Agnes has is that there is no insulation on the bottom of the bag. It makes perfect sense! The insulation on the bottom of the bag just gets compressed under your own bodyweight and ends up having very little insulating properties. Also, if you’re winter camping, I surely hope you have a nice pad(s) to keep the frozen earth away from you. So, they took all of that extra down that they would have used on the back, and just added it to the top of the bag….where you’re trying to create dead air anyways. Brilliant!

The next thing was the built-in sleeping pad sleeve and pillow pocket. I bought a Big Agnes Insulated AirCore pad to go with it, and it fits perfectly. There’s no rolling off this thing because you literally can’t. The pillow pocket is nice because you don’t have to worry about it ending up on the side of your face and your head on the ground. It also fits my Kelty pillow perfectly.

The air dam around my neck and shoulders is nice, but I’m pretty sure that’s standard issue, as is the dual zippers for venting.

The last feature, that just ended up being a bonus, is that it stuffs perfectly into the bottom of my Kelty Redstone 5000 pack. No need to put it in a stuff sack and carry it on the outside or waste space on the inside.

So far, the only “con” is that, with 650 fill goose down, it’s too hot! In the Boundary Waters, I was sleeping in nothing but boxers and had it unzipped most of the night. I then camped out in my parents’ yard when it got down to the mid-teens. I added an extra layer of clothing just to be safe and ended up sweating so bad, I had to go back in the house at 2am.

My first REAL winter trip this year had similar outcomes. Again, I cautioned on the safe side because shivering your ass off a mile away from the car does not sound like good times. I bought a fleece liner from Gander Mountain to go along with the bag. I started out sleeping in my base layer and insulating layer. I ended up sleeping in my base layer on the bottom and a t-shirt on top. At one point, I unzipped the bag, sat up, took the t-shirt off and had to let myself dry off before lying down again. As we were breaking camp the next day, I noticed water (sweat) collected in the ridges of my sleeping pad. Yikes!

Next time: no liner, just my base layer, and keep an extra layer in there for security.

Just as I got done praising the bag for being a touch over-sized, I am now listing it as a “con” too. (See how contradictory I am?) I have a Eureka Spitfire solo tent and the shoulders of the bag touch the outside of the tent. This leads to some problems with condensation. Next time out, I’m going to see what happens when I use every guyline possible.

Lastly (and this is nitpicky), I get slightly annoyed by the fact that the sleeping pad made specifically for this bag is narrower than the bag. Meaning, as I’m lying on the pad, with arms by my side, the fall all the way to the bare ground. This forces me to sleep with my hands crossed (or down my pants). I eventually fall asleep, but it is annoying. Just make the pad a little wider, mkay?

And there you have it! A damn near 1,000 word blog post on a Big Agnes Storm King 0-Degree sleeping bag! Hope you got some use out of it.