Climbing Vedauwoo: The most fun you’ll have not sending

I was climbing at a famous off-width crag in Wyoming by the name of Vedauwoo (Ever heard of it? You should, I wrote about climbing in Vedauwoo with Pamela Shanti Pack last year.), and something bizarre happened. I only sent two routes all weekend, and it was arguably some of the most fun I’ve ever had at a crag.

What you need to know about me is that I hate failing on a route (that is, not reaching the top of the climb). I don’t really believe in projecting, and my happiness/amount of fun I have climbing is largely dependent on my ability to send. You may or may not agree with that, but that’s the way it is and I’m ok with it.

Momma’s Got a Sqeeze Box 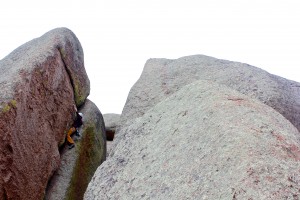 There were some people warming up on Worm drive, a 5.11 off-width, and Shay decided to put up some 5.9 hand crack. I looked at Derek and said, “welp, I guess we better go set that squeeze chimney.” We had no idea what it went at, but Danny, a fellow Team Evolv climber, said, “oh that one’s fun!” It didn’t look so bad from the ground, and hell, we all know what they say about chimneys, right? You can’t fall out of them. (Once we got back to civilization, I looked up that route. It was Momma’s Got a Sqeeze Box, 5.10a.)

We were both excited and not excited to lead it, but it was bolted and Derek stepped up. He made the first two bolts seem pretty easy as it is a lot wider down at the bottom. It was a little tighter, and not quite as effortless up to the 3rd bolt. Above the 3rd bolt, the squeeze chimney turns into a legit off-width. This was Derek’s first time off-width’ing, and he wasn’t quite ready to step out on lead. Queue me…

I have climbed exactly two (2) more off-widths in my life than Derek. I guess that made me the more experienced one of the two, and I offered to finish the route. What I would soon find out is that the the first two bolts were not easy, even on top rope. The size of the crack between bolts 2 and 3 was perfect for me for a bomber chicken wing. And then I was leading an off-width. 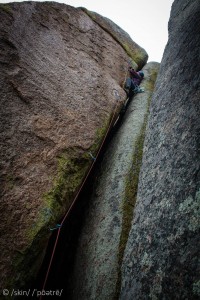 My chicken wing was a little less secure because it kept getting tighter, but still too big for a comfy leg bar or a heel-toe. If it weren’t for the still mostly great chicken wing, the remembrance of the palm down technique, and the hope my Evolv Trax rubber was going to stick, I don’t think I would have made it. Emphasis on trusting my rubber.

Once I got to bolt #4, I found a much needed rest. I hung out a bit, looked up, and noticed it didn’t get any easier. The crack was now too small for a chicken wing, and even though I could get a decent arm bar, there was absolutely nothing else for my left hand or either feet. That was, until…I saw some crimps. Crimps? On the face of an off-width? That felt like razor blades biting into my frozen fingers (it was only about 55 degrees outside)? I tried everything I thought I knew, but a lead fall at this point would be pretty disastrous. You’d end up business side first right into the corner of the crack. Plus, I was so intimate with that crack at this point, I didn’t want to leave. You can’t fall out of a chimney, but you can lead fall off a face climb. My head wasn’t in it, I was pretty physically cashed, and my fingers were much too cold for those razor-edged crimps. FACK!!!!! Queue Shay…

At this point, Shay had already led a route and flailed her way up Worm Drive. But if there’s one thing I’m good at, it’s guilting Shay. She deserves it. And that’s all you need to know. Getting back to the story – she also makes her way up to the 4th bolt. Then, with a little hesitation and a lot of nervous breathing, she pulls the crimps, steps out of the crack, and makes it to the anchors. Ugh. Now I have to do it on top rope. Later. After I steal her little creature. (Click for higher res) 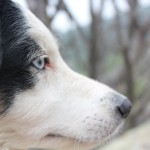 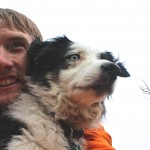 This climb isn’t on Mountain Project, and Danny said it was a 5.9 so I’m just going with it.

There wasn’t much to say about this climb. Other than the fact it was the most physical 5.9 crack I’ve ever climbed. I had pretty solid hands and fists the entire way up, but where there wasn’t, there was a corresponding lack of foot holds as well. And this crack was on an inside corner so it wasn’t always possible to get both feet in.

I’m not the greatest crack climber out there so I’m sure this didn’t have to be as physical as it was, but for me, it felt like I just went a couple rounds with my teenage nephews (plural). Shay also said it was a brute of a climb and we agreed it’s somewhere in the low 2-star range. That made me feel slightly more justified in my struggle. 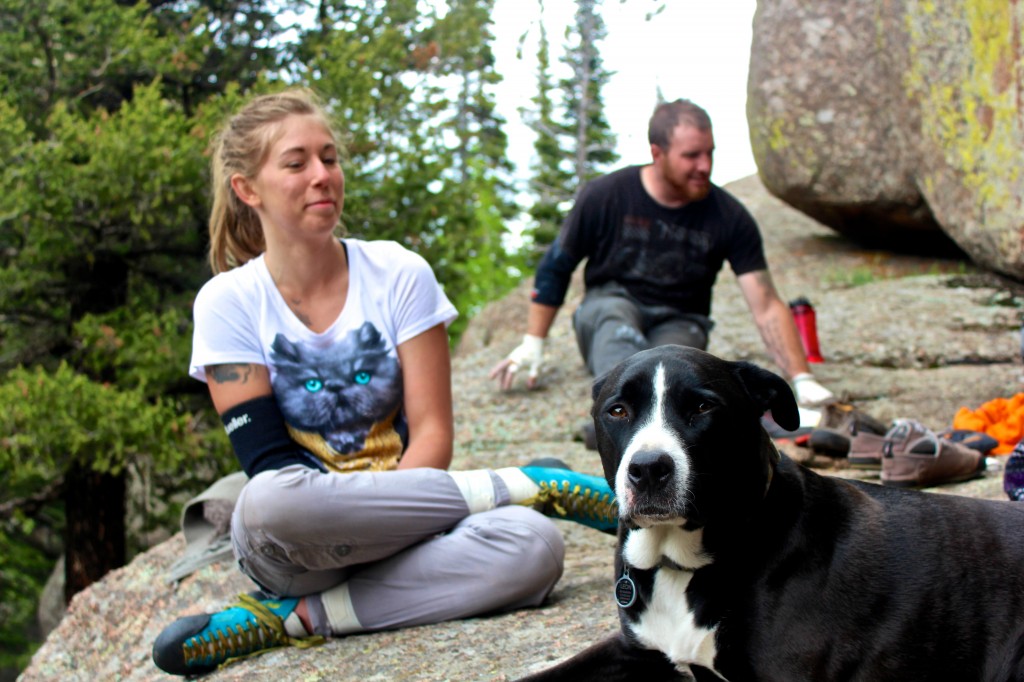 I’ll save all the details and just pick up where I left off. Now that I knew the crimps were the key to success, and I didn’t have the fear of a lead fall, I kinda made that crux my b*tch. Don’t worry, the razor crimps still got me, and I immediately hated myself for not finishing the lead.

By this time, the rope was off Worm Drive, and I never had a chance to flail or see if I could get off the ground (the crux of the climb). After my 2.625 climbs for the day, I was absolutely DONE so it didn’t hurt my feelings I didn’t get a chance to climb the hardest route of the day. 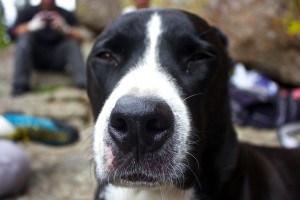 This is how *I* feel about bouldering

However, just about every single muscle in my body was sore, not to mention the contact bruises that come with inserting yourself into granite cracks. So when Danny invited us to boulder with him, I was at a crossroads. On one hand, I don’t boulder (much less off-width boulder). On the other, flailing and struggling for 100′ is a lot more work than flailing and struggling for 15′. I chose….bouldering. It seemed physically less horrible.

First up was Life Without Parole, a V4 requiring an inversion, which I’ve never done before either. I cannot explain to you the mind-f*ck you go through the first time you trust cammed feet in an off-width crack and cut your hands loose, leaving your head to hit first should your feet fail. Thank goodness we were only 8″ off the ground. 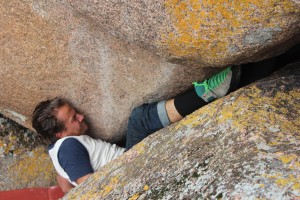 The ever popular face smear

I was just really happy I could invert on my first try. The next couple were spent trying to get my feet deeper and higher into the crack. Then pulling out and switching my right foot to cam the other direction. And the final foot trick once I could switch my right foot, was pulling my left foot out and changing it to a toe-hook at the back of the crack. After all of that (which actually doesn’t take long if you’re good at it), you have to do one MASSIVE sit-up to get a stacked fist near your right foot. I got to this point one times but couldn’t pull the move. It was so much fun though!

After Life Without Parole, we went deeper into The Dungeon for Escape Tunnel, V5. Once again, this climb starts only about 2.5′ off the ground and requires an inversion. I got that the first time again and cleared my head (which is the first mini-crux). And that was as far as I made it on that climb. To be fair, it was starting to get dark and stormy, other people wanted to try, and there was still one more tortuous problem left. 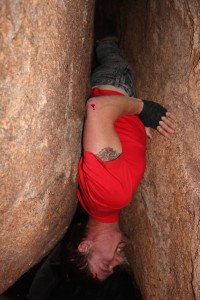 It starts with a squeeze chimney that is just the right amount of awkward to make you question how to get off the ground. Once you get up high enough, you hit a solid, vertical chicken wing and then start your inversion. This was very heady as your….head….is about 3′ off the ground and there’s not really any space to tuck and roll should you fall out. There’s not really much space for your spotter(s) to do any good either. (P.S. 3′, head first, feels more like 10′.)

Now, the trick of this part is to do a controlled lower via double-inverted chicken wing and wriggle your way out of the crack (horizontally). I made it this far, but after being upside down for what felt like 5 min., I kinda gave up. I think I could have made it out to the pivot at least, but that seemed like too much effort.

The thing about Off-Widths

So that was that. After The Warden, the skies opened up, lightning was striking, thunder was rolling, and we headed into Laramie for burgers and beers. All in all, I completed 2.625 routes the entire weekend and attempted 6. Here’s the thing about off-widths…

But they suck in a good way.

And no one expects you to be good at them. Ever. 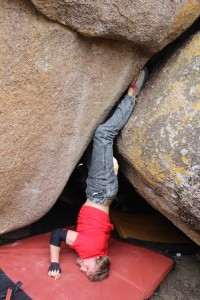 If you flash, red point, pink point, brown point, on-site, (I don’t even know what all of those things mean, I just hear climbers saying them sometimes) or just ‘send’ an off-width, everyone is completely stoked for you. But it doesn’t appear to be the norm.

The norm appears to be more like, “well, shit, I guess I have to go climb this. I want to, but I really don’t, but I guess I will.” Flailing, aiding, top-roping, swearing, insults, and talking sh*t are all encouraged. Laughing at your own pain and suffering (or others’) is what gets you through the climb. No one seems to mind if you can only do 2 or 3 climbs in a day. There seems to be a lot less judgement if you decide you don’t want to climb at all the day after.

The climbs are generally slower which leads to more downtime for you and your belayer to joke around (safety first!). If there’s an audience, there tends to be a little back and forth with some small encouragement mixed in.

Crag beer and crag whiskey are almost required. I think it’s to numb the pain you’re about to put yourself through and/or forget the pain you just felt.

All in all, off-width climbing feels a lot like a bonding over misery. But with the right people, it’s incredibly fun. No expectations. No disappointments. Just a lot of joking around, smiling faces, a little bit of climbing, lots of fear, and whiskey. 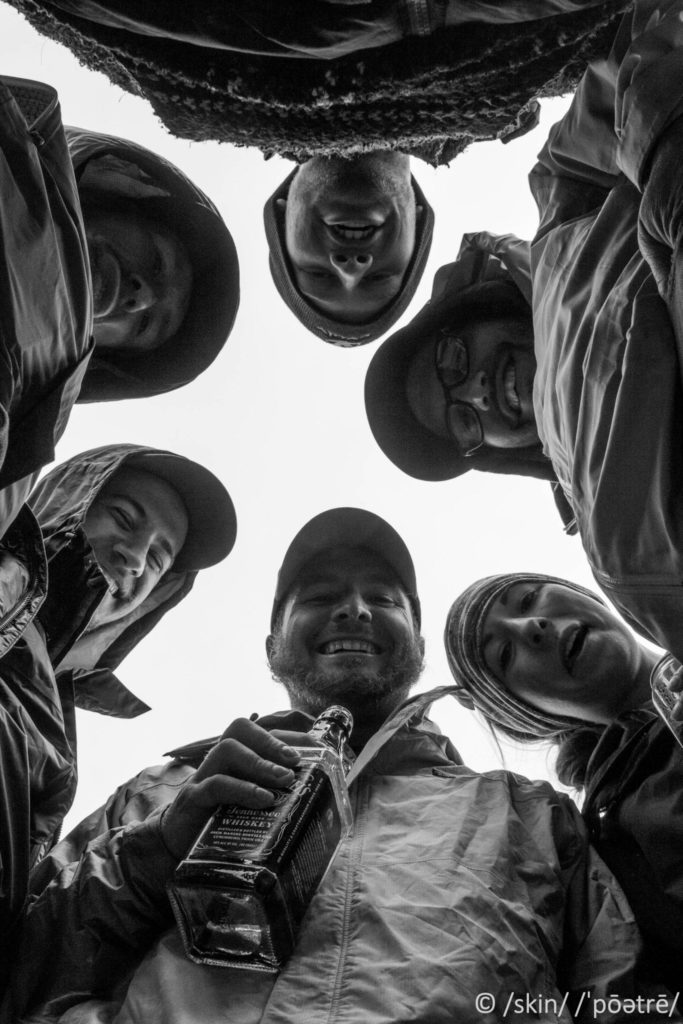 For more (and MUCH better) photos, check out Shay’s post from this weekend.