Several months ago when Anh and I decided that we’d like to go rock climbing in Spain on our trip to Europe this spring, one of the first things I thought of was, “hmmm, I wonder if it’s safe to fly on an airplane with rock climbing gear?” After some internet sleuthing, I figured out that all of our gear should be fine as long as it’s checked.

Fast forward (or rewind, depending on which frame of time we’re in….or maybe we’re in both….I don’t know; ask Schrodinger’s cat) a couple of weeks and all of a sudden we were planning a semi-impromptu rock climbing trip to Red Rocks outside of Vegas over a long weekend. At that point, my question was, “hmmmm, I wonder what rock climbing gear is safe to put in our carry-ons vs. being checked?”

What Gear will get through TSA Security? 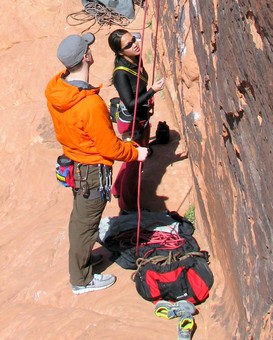 You can see a small sampling of the gear, all of which made it through TSA.

After looking over the TSA regulations for prohibited items, I decided that the only gear that we may have trouble getting through would be a nut tool and climbing chalk. Of course, a bunch of ropes and metal carabiners should always be assumed to raise an eyebrow or two (probably).

** Side note: I wasn’t sure about cams, but we had already decided we wouldn’t be bringing cams so it didn’t matter. **

Anh sent a picture of all of our climbing gear to her friend that works for TSA, and she said that it should all be fine…except for maybe the nut tool.

That still didn’t put my worries to rest. The TSA seems like an organization where one person might say something is “ok”, and then once you get to the airport, the person that actually checks your carry-on might say “no way, Jose; you can’t fly with that” depending on their mood that day.

My worries didn’t really matter though. We weren’t going to pay the ridiculous baggage fees. To mitigate the risk of getting too much of our gear split up if we were forced to check something, we packed all of high-risk items in one bag: chalk, biners, draws, nuts, and belay tools. All of the webbing, slings, and both of our ropes went in my rope bag. We decided to leave the nut tool at home.

Anh was so confident that all of this would pass through TSA security that we even planted a “test” in our bag. We had a bag of brand new, sealed climbing chalk and a plain ‘ol Ziploc sandwich bag with some chalk I just had laying around. We wanted to see which, if any, would be confiscated. (For this reason, we got to the airport 2 hours early, assuming we’d probably be searched quite thoroughly.)

As it turns out, Anh was right about everything. We made it through security with all of our rock climbing gear with absolutely no problems. We fit 2 ropes, assorted webbing and slings, 2 sets of nuts, lots ‘o biners, 18 draws, 2 bags of chalk, 2 helmets, 2 pairs of shoes, and enough clothes to climb and go out on The Strip for 3 days and 4 nights into 4 carry-on bags.

I’m not saying your experience will be the same as ours. I’m not saying every TSA checkpoint will approve of all of these items all of the time. All I’m saying is that if you’re looking for an experience of flying with rock climbing gear, here’s a successful one for you. We made it safely, our gear made it safely, and we didn’t have any problems with TSA security (in either direction).

Hopefully that calms some of your worries about flying with rock climbing gear. Now that Spirit Airlines is flying out of MSP to LAS for $28, I think we’ll be flying with climbing gear a couple times a year! 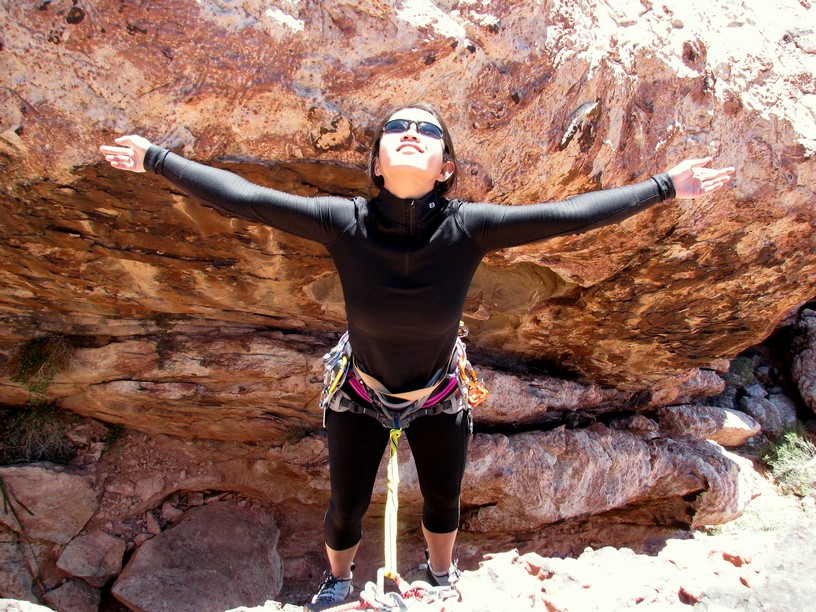