I’m going to try my hardest to keep this series going throughout the football season. I hope you enjoy it.

I needed to add the specificity of your favorite NFL team because while there are some beastly receivers out there like “The Johnson’s” (Calvin and Andre), I’m just not that intimately familiar with them on a week-to-week basis. Now, Packers’ receivers? Hohohohoho, yeah!

Ho-kai, so, as strongly alluded to, my favorite team is the Bing Bang Packers. Wait, that’s what my sister used to call the Green Bay Packers when she was a tiny, little child…..or so I’m told…..because I wasn’t alive yet…..so how could I know firsthand? Duuuuuhhhhh!

I know there were obviously some greats before my time. Don Hutson and James Lofton come to mind. But I can’t say I know much more about them than what my dad and/or the internets tell me about those guys. That leaves me with the recievers of my era. This is the list that comes off the top of my head (I’m sure I’ve forgotten a few):

To be honest, I don’t think Rison and Franks belong on this list. The only reasons they are here are because even though I don’t like them, you can’t deny what they did for the team. After the top 3 receivers got injured late in the 1996 season, Andre Rison was brought back from obscurity and played a major role in winning the Super Bowl that year. Bubba Franks, I believe, was garbage. But again, you can’t deny how many touchdown passes he caught. It’s just that, most people only remember those. I can’t seem to forget how many easy passes he dropped over the middle.

Sterling Sharpe still holds records, and he only played for 6 years. I barely remember him, but I do remember him being one of the first receivers to get over 100 receptions in back-to-back seasons.
Brooks, Freeman, Chmura, Rison, and Beebe were the 4 main dudes on the Super Bowl team. They were all standouts in the league, even when the team wasn’t the greatest. It’s hard to discount their performances in the years the Packers dominated the NFC along with the Cowgirls and 49’ers.
Franks, Driver, and Jennings are kind of the new guys. Well, Driver is old balls, but he’s still lumped in with the post-1996 Super Bowl teams. Pretty much anyone post-1997 is part of the “new school” for me….even though that was 14 years ago.

So, who is my favorite? 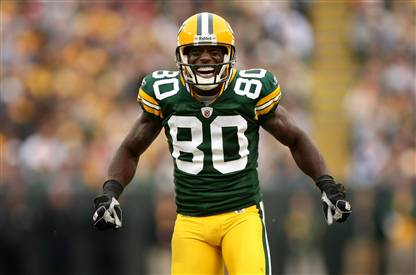 The guy has been amazingly durable. He’s been through thick and thin since he joined the team. He’s been a top receiver in the league every damn year (even if he hasn’t been in the media spotlight), number’s don’t lie. His physique is incredible. Have you seen that guy without pads? Like, frickin 7% bodyfat at all times. How about toughness? I cannot think of another receiver other than Jerry Rice (and maybe The Greatest Show on Turf members: Faulk, Bruce, Holt, Hakim, and Proehl) that is better at picking up yards after the catch and yards after contact. The guy is quick, agile, and tough. I mean, honestly, what is there to NOT like about this guy? Did I mention he holds the Packers all-time receptions record?

What about off the field? He does a crap ton of charity work, like a lot of NFL stars, but can you remember him ever getting into trouble? Been called a dirty player? Known for running his mouth? Nope. Nope. Nope. And nope.