I am no stranger to sunburn. I’ve dealt with it my whole life. I know, I know, prevention is key and sunscreen is my friend. Blah blah blah blah. Save your lectures. I’m more than aware of all of these things, and most of the time, I adhere to them. That doesn’t mean mistakes don’t happen or it’s out of my control sometimes. But this post isn’t about the worst sunburn I’ve ever had; it’s about the worst recovery I’ve had…which is currently taking place.

While I’m not a ginger, I do have [mousey] blonde hair and blue eyes. As far as I know, the entirety of my dad’s side of the family is from the Poland-Czech border region, and my mom’s is a conglomeration of all the whitest European countries: England, Ireland, Sweden, and Norway. I’m dangerously close to not having a soul. With that in mind, you’d think I’d be a little more careful in the sun. Most of the time I am. Most of the time, one application of SPF15 keeps the burn away as long as I’m not in and out of water; in which case, I reapply. When I go climbing, I sometimes carry up to 4 different sunscreen products: SPF lotion, SPF spray, SPF stick (for my tattoos and ears), and SPF chapstick. But you know what? Sometimes I can be vain and just really want to be tan.

A Recent History of Burninating

(I love you so much if you know where that reference comes from.)

I can’t recount every time I’ve recently been burned, but I can remember the really horrible ones. There’s been but three in the past year. Sadly, two within the past four weeks. The first one was a trip down to Cozumel, Mexico. Thinking I was cool with one application of SPF15, I went about my day snorkeling and laying out and taking trips out to the ocean. The cream said it was super duper water resistant so I figured it was ok. I did the same thing back at the lakes in MN and WI and never had a problem. What I forgot was that the ocean has salt in it. Salt is abrasive. Which takes the lotion off much quicker. It’s also super clear water. Which reflects light more easily, as opposed to the brown, algae-filled lakes of the Midwest. The result? This: 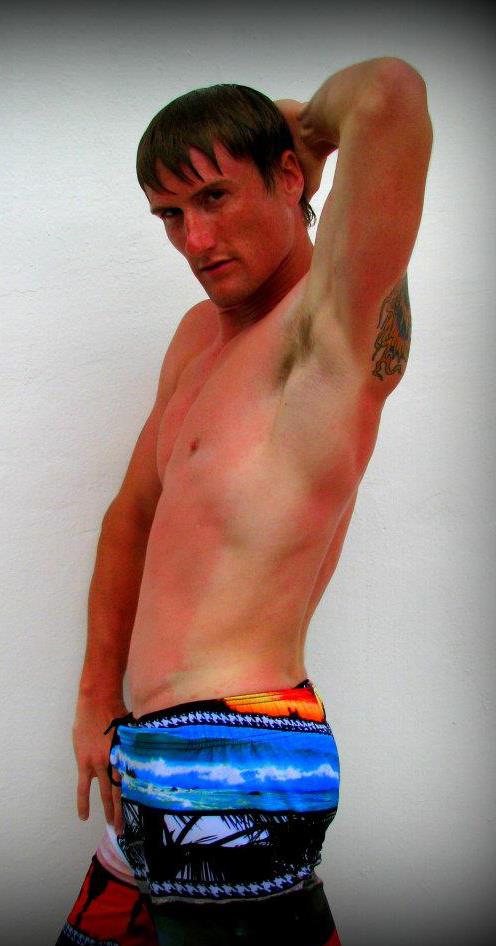 But even after that horrendous burn, the aftermath was nothing unusual. 100% Aloe Vera, applied multiple times, a little uncomfortable the first night, and then nothing but a bit of pain and some itching for the day or three after.

That was last May, and now a year later, I find myself in a similar situation. Except that was purely ignorance, and the past two times within the past month were accidentally on purpose.

Four weeks ago while climbing, I decided I wanted to not be pasty white anymore so I took my shirt off. While neither climbing nor belaying, I made sure to face my chest and stomach to the sun since climbers’ backs are usually what get it. Then I climbed a route, then I belayed, then I stood, then I climbed again. I say that now, but as it was happening, I had totally forgot how much time all of those things take. And my back was to the sun the entire time.

Finally, we get to where I am today. After summiting Mt. Elbert on Saturday and forgetting to put sunscreen on my face, which was genius, I went to the pool at my apartment complex on Sunday because once again, I wanted to be tan.

I put sunscreen on my already burnt face and brought a handkerchief to cover it as well. Then I thought 22 minutes on my back, 22 minutes on the front, and leave. Except, after I stuck to two-thirds of the plan, I got distracted and started talking to some of the other residents at the pool. I forgot the “leave” part of it. I knew I was over my planned limit, but I’m also decently ok at telling when I’m getting burnt.

Or so I thought. 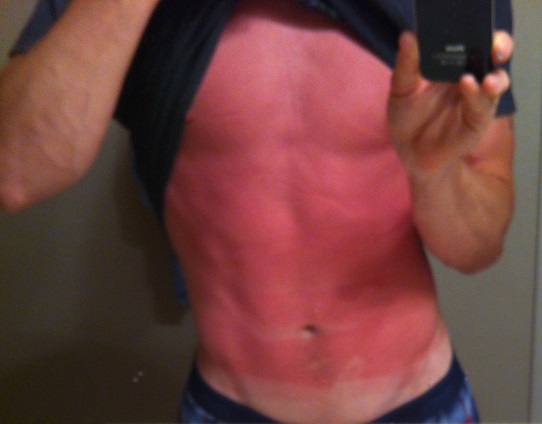 To be honest, the burn isn’t as bad as the one from Mexico. It might look worse, but trust me, it’s not! Which is why I really don’t understand what’s happening now… 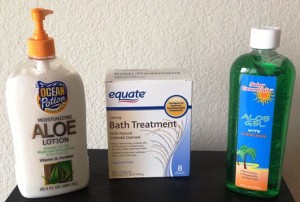 I learned about “hell’s itch” at about 2:30am this morning. But before that, I had no idea what was going on. I knew that I was itching so bad that no amount of 100% Aloe Vera was working, and I had to leave work at 2:30 in the afternoon.

I did a little looking online and saw that people were suggesting Oatmeal bath treatments and this stuff called “Ocean Potion”, supposedly formulated for sunburn. I went to Walmart on my way home and picked up the supplies.

The bath and new lotion seemed to help. The itching never stopped completely, but it was at least tolerable and the time between twinges of itches that needed to be scratched was long enough that it didn’t bother me. At 10:00pm, I put on my third and final application of lotion before going to bed.

Then I woke up at 1:30am. “Woke up” is putting it pleasantly. It felt like a circus of fire ants had hatched under my skin and were looking for any way to get out!

I put on the Aloe with lidocaine, hoping the lidocaine would numb my skin long enough that I could fall back asleep. It just made the itching worse! I wanted nothing more than to scream in frustration.

I put a cold wash cloth on my stomach. Helped, some, until it warmed up again.

Then I went and laid on the floor in front of the open patio door because I could feel the 50 or 60-something degree air coming in at my feet. I thought for sure the coolness would stop the itching.

Again, I just wanted to scream!!

I had once gotten burned so bad, so, so, so incredibly bad back in college that I ended up getting a 103 degree fever. We had to call the hospital. But that was due to the burning, not the itching. “Should I call the hospital,” I thought? What would they do for me? Give me numbing cream? Anti-histamine spray? I didn’t know, but I didn’t feel like the hospital was the right choice.

I realized that earlier in the day when I had done the initial research, I had looked up remedies for dealing with “sunburn” in general, not the itching. This is where I refined my search to “post-sunburn itch” and learned about Hell’s Itch.

These posts are hilarious, and incredibly, accurately describe my situation. Please read them for a good laugh. How to Survive Post Sunburn Itch

After 45 minutes of applying aloe & lotion, ice packs, and chugging water, I would have traded my first and last born to be able to rewind the last 60 hours of my life. The previous Saturday afternoon I had committed the sin of skipping the sunscreen before a day at the beach.

Except, the conclusion of that post was getting some “A&D Ointment”. Well, I had no A&D Ointment, and supposedly the Ocean Potion is fortified with Vitamins A and D. That post did nothing but make me chuckle. Which was well appreciated at that time.

Then I found this post: Sunburn Fire Ant Hell Itch

This itch is unlike ANYTHING ELSE. It makes me want to rip my skin off using rusty razors, to put it lightly.

I felt like the only relief would be to knock me out. With that in mind I started contemplating taking strong pain killers and drinking myself to sleep with tequila. I’d been googling all night trying to find a cure and was at my wits end. If there was a cure that required you to rip off your toenails with a rusty chisel and then eat them, I would have done it in a heart beat.

The author suggests “boiling hot” showers to fix this problem. She does mention a boiling hot shower seems counterintuitive for treating a sunburn, but at this point, I’m beyond treating the burn and onto treating the severe itching.

At 3am, I begrudgingly go to the bathroom, turn on the shower, and take the second most painful shower of my life. But you know what?

Down in the comments of that post someone also suggested that the itch is due to an allergic reaction and anti-histamine pills would help too.

As a chronic allergy sufferer, I have some of those too!

So after my scalding hot shower and popping an allergy pill, I was finally able to lie down in my own skin. The coolness of the night and the exhaustion of the battle came over me. I slipped gently into the night. 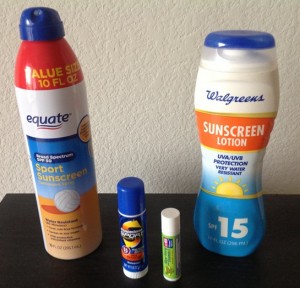 Despite being sun burned hundreds of times before, this is the first time I’ve ever experienced this kind of itch. I never ever want to experience this again. Regardless of how sexy I want to look with a great, bronze tan, it will NEVER be worth it again.

I will try my damndest to never leave the house when I know I’m purposely going to be exposed to the sun without my arsenal of sun products.

If I happen to get a tan through the SPF 15 without burning, great! But if I happen to end up staying translucent white all year round, I’m now totally fine with that too.

Now, if you’ll excuse me, the fire ants are back and need to go take my third scalding hot shower. Oh, and I still have the “normal” itching of post-sunburned skin to look forward to too.