If you remember correctly, I announced back in October that I had been selected to become a member of the afore mentioned #OmniTen crew for this fall and winter season. This season was nothing like the previous three.

Instead of having three days to spend with nine other outdoor enthusiasts and social media influencers within my season, we were going to have ourselves a little competition against everyone from the previous three seasons! And so the #OmniGames had been written, and so they had come to pass. 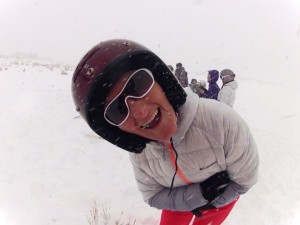 We were broken up into teams of two by picking names out of a hat and pairing summer members with winter members to try level the playing field. I chose the righteously fabulous @Bananabuzzbomb (Heidi Henry) from Season 1. She’s a desert rat living in Arizona right now, but I have faith we can pull off a Top 5 finish to win the trip to Jordan (the country). Oh! Did I not tell you that’s the grand prize? Well, it is, and now you know. And knowing is half the battle.

I’ll tell you a little more about the specifics of the #OmniGames later this week, but for today, I wanted to focus on #TryingStuff.

As I explain in the video below, #TryingStuff is more than a slogan. For Columbia and its employees, it’s a culture – a way of life. This resonates with me because I love to make jokes about trying stuff:

“Just got a drink tossed in my face for pretending to be Barney Stinson. #TryingStuff.”

“Read my first book ever. #TryingStuff”

But honestly, I hate complacency. I hate being really good at something and then never challenging myself to be even better. I can honestly say, that before this trip, I had no idea how dedicated Columbia is to continuous innovation. They’ve made a believer out of me.